FLORIDA: A FOOTBALL STATE WITH AN STD PROBLEM

Share All sharing options for: FLORIDA: A FOOTBALL STATE WITH AN STD PROBLEM

You give us the STD rates for an entire state, and you're damn right we'll match them up by fanbase. The really dark blue spots on the map are the worst for STD rates in the state, and Florida State is officially ahead of Florida by a wide margin by home county. The rest is pretty random, but what we really want you to see is that Florida State is a way easier place to catch gonorrhea, chlamydia, and syphilis than even the University of Florida. (And by the numbers it's really, really easy to do at the University of Florida.) 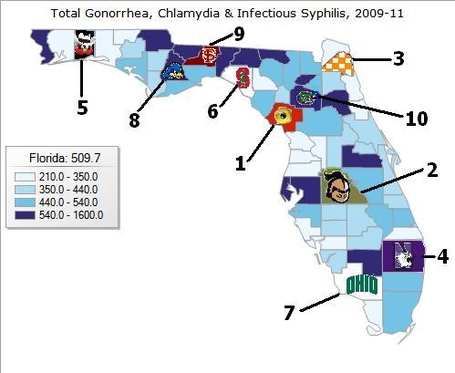 1. Levy County. In the state they're only 15th in STD rates, but we gave them Clemson because 8-Ball's eye looked best here. Levy County was one end of a railway linking the ports of Cedar Key and Fernandina, so that syphilis is probably some strong bulletproof maritime legacy shit that laughs at your "antibiotics". 8-Ball is also a reminder that many people with STI's don't even know it or don't report it, because fuck man I just know that's my boss calling I haven't shown up to a shift in WEEKS

2. Polk County, ostensibly UCF territory, sits low in STI rates because UCF fans don't even know how to sex right.(George O'Leary rubs his penis on an ottoman for 45 minutes)

3. Duval! Number five in the state, and presumably Tennessee territory because Jacksonville is going to draft Tyler Bray to save the franchise. Given his propensity for spraying it all over the field, it appears he'll fit in just fine with the empirically careless locals.

4. Palm Beach County. Northwestern territory because a.) trust funds and b.) they didn't count Darren Rovell as an STD, thus skewing the data. P.S. Darren Rovell is an STD in the virtual reality world depicted in The Lawnmower Man.

5. Okaloosa County. Texas Tech Territory because Kliff Kingsbury popped his collar once there at Red Bar, swooning a gaggle of your drunk mothers. He has nothing to do with the middling STD rates because the Air Raid is all about protecting the quarterback, nod nod wink wink it's a metaphor about dicks.

6. Taylor County: Stanford territory, since its population of 19,000 is about as many people as you'll ever get at a Stanford game, and because five Stanford grads could buy it (and its modest STD rates) and have money left over for lunch. Like Stanford, low STD numbers because no one has ever caught gonorrhea playing WoW.*

*Stats do not include those working off toxic Russian servers

7. Collier County, like its counterpart Ohio in football, can't get any respect in the Florida STD ranking because it's not a traditional power. But the upper crust of Naples has diseases you've never even heard of, like "amethyst shaft" and "putter's crust."

8. Liberty County: diehard Delaware fans, mostly because of the large population of Delaware child support warrant exiles living there. 15th in the state in STDs, so the little blue hen that could of Florida's STD tournament. (Blue chickens are that color because they have chicken AIDS.)

9. Leon County. Number two in STD rates in the state of Florida. Florida State's back, and needs to have an uncomfortable but necessary conversation with you. And your brother. And your aunt. Like, especially your aunt.

10. Alachua County. Fourth in the state. First in your heart. Third in line that night, and that's the last time you ever do that in Gadsden County. (WHAT IN THE CLAPPY HELL IS GOING ON IN GADSDEN COUNTY, FLORIDA?)