THE CURIOUS INDEX IS A BALLER

YOU'RE A BALLER. The trend of writing hundreds of handwritten letters to recruits does bring up the awkward question: what could a football coach possibly write to a recruit on the 98th letter that letters 1-97 did not cover? And might these all not be what one might call "clear in the signal-to-noise" ratio?

Your suspicions, via recruit Michael Ferns III, are verified: 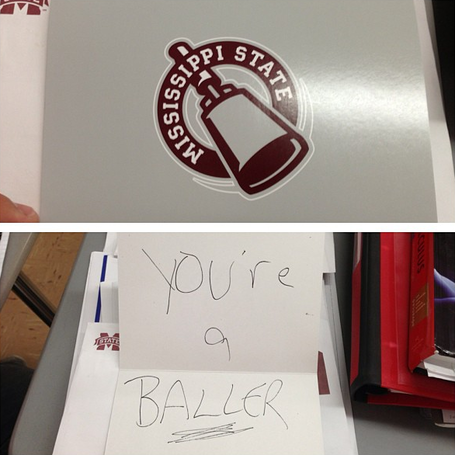 It's great that the art of the handwritten letter has returned in one form or another, but whether Tim Brewster--and that has to be Tim Brewster's zombie letters, still flying out the door from Miss State after his departure for Florida State--is the man to lead the way is clearly in doubt. But yes: the you're/your usage being nailed here does disqualify him from at least half of all internet commentary.

R.I.P., JACK PARDEE. The former Houston coach is dead at 76 of gallbladder cancer. Pardee may be one of the few people to claim roots as a Bear Bryant disciple and a run 'n shoot practitioner, having been one of the original Junction Boys and leading the Cougars team that once hung 95 points on a post-NCAA evisceration SMU squad. Pardee was also a talented athlete, and conditioned himself by working in oil fields from the age of 14.

FAREWELL IN SEARCH OF THE MISSING L, RUSSEL. The much-heralded Russel Shell will be leaving Pitt to search for the missing L in his first name and playing time, presumably. Leaving Paul Chryst's insanely running back-flattering offense seems weird, but this seems to be a case more of simply not fitting with the school/program than any one dissatisfaction. Sometimes that happens, and no one is at fault. (No really, sometimes it just happens.)

THE SILKY TONES OF MARCUS LATTIMORE. Garnet and Black Attack got the man himself for a podcast, and he talks a lot about not eating like an idiot helped his recovery from a heinous leg injury.

ETC: No, that's not a terrifying article about white supremacists at all, New Yorker.