IT'S NOT LOUISVILLE'S FAULT, BUT DAAAAAAAMN, LOUISVILLE

First off: this is not Louisville's fault. They have tried to bolster their schedule, are moving conferences, and are doing everything possible to not be where they are schedule-wise. They beat the daylights out of Florida, so we feel compelled to say that for our own selfish purposes: Louisville has a superb football team, have locked down a superb football coach for a long time, and losing to them is honorable and okay not a reason to go outside and tear a piece of your deck off and throw it into the yard. You don't need to do that at all, even if that is precisely what you did.

Second: goddamn, Louisville's schedule in 2013 is just an awful collection of tiny miserable short stories that all end with Teddy Bridgewater throwing for 500 yards under a shower of raining panties.

Week one: Ohio Bobcats. "This might be the best team we face all year," said Charlie Strong. Frank Solich laughed. "No, Charlie, you guys will play...oh god, Charlie, I'm so sorry." Strong held him as he wept; Solich breathed in the rich, comforting aroma of the Louisville coach. He would never feel so safe or loved again.

Week two: East Kentucky Colonels. Danny Hope used to coach at EKU, long ago when Steve Jobs and Johnny Cash were alive. Now it is 2013 and they have no Hope, no Cash, and Steve Jobs' head in a jar of 90 proof bourbon. Don't ask, it's some weird Kentucky shit.

Week three: Kentucky Wildcats. In the second quarter, Mark Stoops will look up at the empty stands and realize those 50K at the spring game probably were just there for the free dental clinic.

Week four: FIU Golden Panthers. "You mind if we let Isaiah Thomas coach this game?" Charlie looked puzzled. "Why would you ever do that?" "You ask why. We at FIU ask: why not?" FIU AD Pete Garcia smiled, and then rode off on his pet ostrich, Camembert.

Week seven: Rutgers. There is no funny story here because this is a Thursday night game against Rutgers, and that there is no fucking way Louisville is not blowing a flawless season against an easy schedule by not flipping this particular biscuit into the shitpile. IT'S WHAT RUTGERS IS THERE FOR.

Week eight: UCF. Week eight: It was unseasonably warm that night. Teddy glanced to the opposite sideline. What was the coach mouthing? It looked like...well, it looked like "drown puppies." The heat had to be playing trick on Teddy's eyes.

Week nine: USF. A lonely BJ Daniels just sits outside the stadium just trying to throw empties into a garbage can, only to overthrow them directly into the arms of a sunburned homeless man playing safety. <---Jon Gruden going through some things, singing "Times Like These" out-of-tune while crying.

Week eleven: UConn. UConn somehow wins this game despite having only 32 yards of passing and only the advantage of pure unadulterated horror: 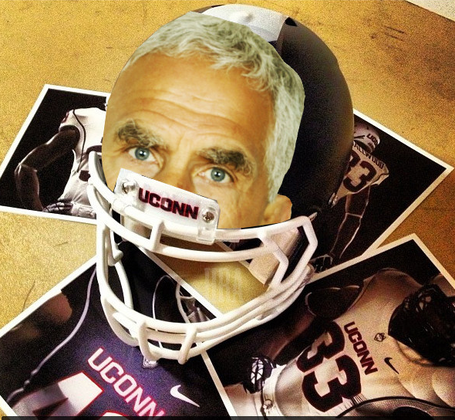 Week twelve: Houston Cougars. Things were pretty quiet these days at the switchboard, but people still called Information, and Roy was still going to provide them with it. His light flashed - an incoming call. "Yes, I'm just wondering what time the game against Houston kicks off." Roy smiled to himself. "Well, ma'am, this isn't that sort of information line, but I can tell y-" Ninety straight seconds of fart noise from the other end drowned out the rest of his response.

Week thirteen: Memphis. "As Gregor Samsa awoke one morning from uneasy dreams he found himself transformed in his bed into Memphis football." Franz Kafka frowned at the page. "No, no, too frightening. Let's go with cockroach instead."

Week fourteen: [bye week] [Charlie Strong gets five pounds stronger on the bench press without even working out once]