THE FANTHEON OPENS AND THIS MAN IS FIRST

WE DON'T REALLY HAVE A HALL OF FAME FOR FANS BUT IT"S TIME WE MAKE ONE. HE'S FIRST.

Share All sharing options for: THE FANTHEON OPENS AND THIS MAN IS FIRST

We do not have a Hall of Fame for fans, and that is an error we plan to rectify right now. The Fantheon is open, and this man is the first nominee and inductee. You say you'd like to vote on that? Oh, you can, but the committee auto-drafts the first member as a model of everything a member of the Fantheon should be. 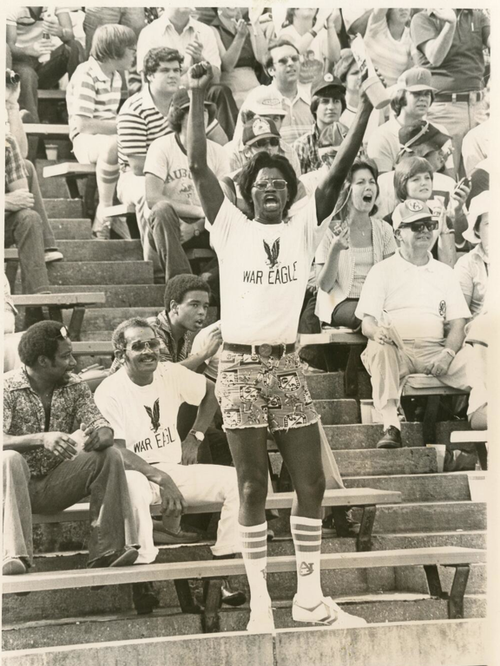 The shorts? CHAMPION-GRADE CUTOFFS OF A PAIR OF WIDE WORLD OF SPORTS PANTS. The amount of ballsy confidence required to suggest that what was in your pants were worthy of an entire sports variety show's billing is staggering enough, but to make cutoffs out of them? Jim McKay once appeared personally to announce this man removing his pants, and swears it was the most moving sporting event he has ever covered.

The hair? Too long to be a conk, blown out and parted down the middle, a veritable Honeybaked Ham of a haircut variation last seen on James Brown in Kinshasa in 1974. The socks are pulled to the knee because a.) ladies, legs and b.) THEY'RE AUBURN SOCKS. The glasses are pure country disco Don, and the shoes are Converse but not Chucks because he's about the now (ladies?).

Finish with the War Eagle shirt and you have the living embodiment of one of our four favorite schools of style: things worn by country black dudes from the seventies and early eighties. (See: the Selmon Brothers here, and yeah probably Barry Switzer, too.) Those other three schools of style: Phil Collins in the "I missed again" video, African dictators, and and cool dogs wearing sunglasses.

It is decided: welcome to the FANTHEON, Captain War Eagle Cutoffs Guy. You are the first, both chronologically, and also in our hearts.

P.S. This guy is also in, we just haven't gotten to him yet.

P.P.S. Nominations welcome in the comments below.