HI. We got tied up yesterday on this end because someone decided to leave bombs at the finish line of the Boston Marathon. Despicable shitheads are born every day, and when they are killed, combinatorial genetic randomness just produces more. One of those assholes is Eric Rudolph, who set off three bombs in the city of Atlanta from 1996 to 1997 and also made a cameo in Birmingham. He is in a hole in the ground now in Colorado, and will be for the rest of his life until he dies forsaken by the sun and humanity.

He claimed to have reasons. They always do, at least by their definitions of reason: some hairy blip of the braincase skips a track, slips a gear, and malignantly connects the unrelated dots of their life into a pattern of deformed fictions. False flag. Jihad. Christian Identity. Liberation. The homeland. Those reasons turn into four dead black girls in Birmingham, a body lying in Centennial Park, and an eight year old boy who died yesterday waiting for his father to cross the finish line at the Boston Marathon.

I remember speeding--my wife driving 100 mph on I-75, headed home because somehow it made sense, in the panic and haze after we heard the bomb go off live on WGST, a noise not unlike a transformer frying out--and thinking that my family was down there that night, wandering around the park. In retrospect I'm embarrassed for the total lack of stiff upper lip, comportment, or whatever you call not freaking out like a trapped bat the instant someone set off a bomb near me. In retrospect, everything was fine: my family had driven back to the house hours earlier.

In retrospect, I wish I had been more cool, more composed, less affected by the stupid, violent conclusions of a deranged argument. I also wish I hadn't wondered why: there never is a why with arguments ending in bodies, blood on brick, and the long trail of hellhounds set loose on the scent of God's errors. I've always hated movies like Se7en not for the gore and violence, but for the credence they give utter morons (even fictional ones) spat out into this life by a haphazard turn of the human roulette wheel. There is no lesson. There is no reason. There is no need to read the first word of that idiot tract, or wait around for its finale. Listening past the first proposal of blood is a waste of time, life, and brain cells.

Joe Andruzzi didn't listen to it. Neither did Bill Baxley, the former Attorney General of Alabama who eventually convicted those responsible for the Birmingham church bombings. This was his reply to a KKK leader who didn't want him to do that. 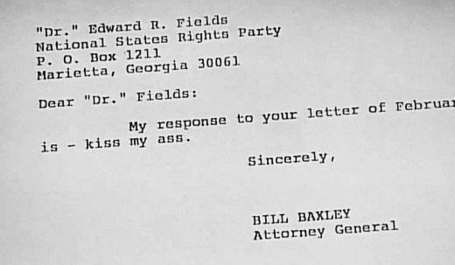 They captured Eric Rudolph in 2003 behind a Save-A-Lot in Murphy, North Carolina. He was starving and crawling through a dumpster like a shithouse rat. If Eric Rudolph had made me read the whole story, I'd think about other things when I thought about Centennial Park. I wouldn't think about watching Wayne Coyne sing beneath a giant projected image of a naked woman smearing wasabi across her breasts at a Flaming Lips concert. I wouldn't think about meeting Big Boi on the Gameday bus a stone's throw away from the bomb site, and thanking him for everything he's meant to the city. (I did this. It is the most fanboy shit I have ever done, and I would do it again in a second.) I wouldn't think about missing a tackle, and watching my son run headlong into the endzone of the fountains without a change of clothes to wear, because I am a terrible father.

If I'd read the whole story someone who finished their martyr's story scavenging behind a glorified Piggly Wiggly wanted me to read about a place, I'd think about that bombing all the time. I don't. When I think of Centennial Park, I think about Gameday being there every September on the first weekend of college football--literally the least and yet most important thing in the world. There's another story someone wants you to remember about places. There is a letter to send them. Aside from the dates, it looks a lot like Bill Baxley's letter to Edward R. Fields, and will have to be resent with different recipients more times than you would believe possible in a lifetime.

P.S. There is no Curious Index today, but we'll be along in a bit.