PANTS ARE TERRIBLE. ONE SHOULD NEVER WEAR THEM 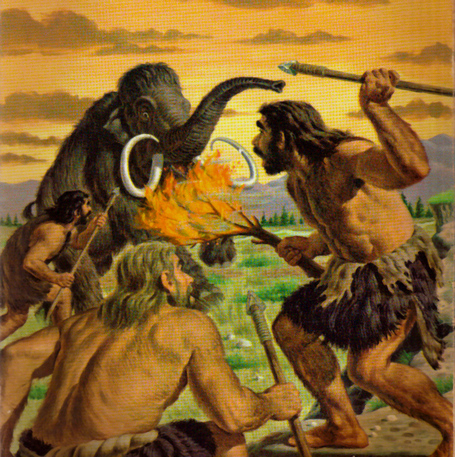 He's doing so many fantastic things you cannot do: wearing his beard as long as he wants, carrying a flaming tree branch around wherever he goes, killing a wooly mammoth with a spear, and dying by 30. Like, guaranteed dead-by-30, most likely toothless, illiterate, scarred like a brothel's most worn-out dildo, and with some truly horrendous ideas about the notion of sexual consent and property rights. You want to be paleo, bro? Dying by thirty pantsless and starving would be the most paleo thing you could do, bro. You should probably die right now for maximum authenticity and authentic quality of life-ness.

Pantsless is the crucial term here. Pants are awful for everyone everywhere, the smothering twin-tubed oppression voluntarily belted, buttoned, and in some cases crammed onto and around miserable legs, asses, and personal parts from Tangiers to Tianjin. Pants are the most popular form of lower body covering in the world. This would be an endorsement for people who confuse ubiquity for quality. In other news: people love Internet Explorer, Time Warner Cable, and cancer, and this is a fucking stupid way to think about anything.

All pants and pants parts are terrible, but all in different ways.

PLEATS. No. Pleats could be, in theory, a way to tuck a big piece of fabric into a smaller space, and thus leave room for future expansion. We have scissors and cheap pants made by child labor now, and there is thus no reason to ever have them.

But they're slimming. Fat bros, the pleat is never slimming. It takes your waist and turns it into a piece of delicately puffed pastry, and makes it appear you have grown a doily over your genitals, and then cinched it between the legs. Sit down and you turn into a half-assed Zouave. If you have one gut, it creates two. If you have two guts, it creates a quantum universe of infinite guts. In none of those possible universes do any of them look good.

The chinstrap beard, pleats, and hawaiian shirts are all fraudy little hooks you keep swallowing in the hopeless effort to not accept your physique and do what fat men have been doing with dignity for years: DRESSING LIKE THE ETERNAL, UNDYING KING OF UNKILLABLE FAT MEN, JOHN MADDEN.

They even turn skinny men into garnished inverted turkey drumsticks. Look at Matt Damon, and how when costume designers wanted him to look like an utter goddamn loser they made the easiest, most logical choice: pleat him up and let the fumes of sorrow and mediocre taste waft from the seams of every deep crease. 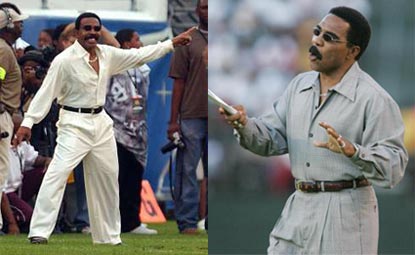 Alvin also lived in the dorms at BCC to save money. He pulled both off, and you cannot because you are not Alvin motherfuckin' Wyatt. Do not even attempt it.

SKINNY JEANS. We have taken you and strapped a bomb to the ankle cuff of these skinny jeans. We have made the jeans wet. You have five minutes to get out of the jeans. You can attempt to take them off, or you can use this hacksaw to cut your foot off just above the ankle. You're going to be using the saw. We don't advocate picking your pants based on hypothetical Mad Max/Saw scenarios, but it must be at least a small part of your decision-making process. You won't regret seeing photos of yourself in these in ten years. Nope. Not one bit.

THAT POCKET WITHIN A POCKET. If you have ever used this you are on drugs or sell them. That is the only thing anyone has ever used this pocket, ever.

WHAT CUT IS RIGHT FOR ME? None of them. You don't even know what any of them mean. Target sells boot cut jeans for twenty dollars, and there is exactly one part of that sentence the average Target shopper understands: these pants cost twenty dollars. I have that many dollars in my bank account, and my other pants have holes in them. Most men's drawers contain four or five pairs of pants bought because they fit at the waist and cost somewhere around twenty American dollars. All pants look stupid because you are a bipedal ape, not because you picked a bad cut.

KHAKIS. Horrible. Only Dr. Dre in 1991 made them work. Wearing Khakis for a white man is to surrender to being at best an undercover agent in Golf Narnia. If you wear khakis while watching HGTV and drinking a craft beer, your penis will shrink up inside you and turn into a third backup kidney that emits a low hum of Dave Matthews' "Satellite" when examined by MRI.

PATTERNED PANTS OF ANY SORT. Just khakis with an earring, a tattoo, and an interesting recent divorce to talk about.

FLAT FRONTS: no one wants to see your penis, but you've never cared what other people think of you.

CARPENTER JEANS. If you can't fit a Sega Dreamcast into each and every pocket, get with the fucking program

CARGO PANTS. Because you love work and carrying shit around so much that you built an entire pair of pants around the notion of becoming a walking, sack-assed trundle of distracted clutter on the hoof. The overloaded Okie Dust Bowl Flatbed With Your Entire Life Packed Into It of pants, because you're gonna go to Californy and eat grapes and let the juices just a-run down yer beard! God, we're so glad the grandfather in Grapes of Wrath dies and dies hard.

DICKIES. There is no designer cut; the legs are the same circumference the whole way down. They were designed to fit a double-barrel anti-aircraft gun.

FATIGUES. They're really comfortable, but you risk being confused for someone terrible like a white supremacist, or a Goth, or Jeremy Shockey.

CAPRIS. The mindbending pant that from a distance makes you say tiny pants....OR HUGE HUMAN?

SWEATPANTS. The gentleman's choice, and the only really honest pair of pants in the world. Rather than insist pants have some innate virtue, and get at least one thing right, sweatpants achieve the highest degree of pants nobility by getting everything wrong at once: simultaneously too big and too small, too hot and yet not warm enough, unflattering at every single angle, sweatpants are incapable of telling any lies. They are a ramshackle, poorly made series of tubes that cover half the body, and tell everyone around you the basics: genital size and location, basic fitness, inattention to detail, and lack of willingness to live or even try anymore by doing things like paying your bills, obeying basic civil codes, or caring.

Everyone on C.O.P.S. ever wore sweatpants, because criminals never lie with anything but their mouths. Sweatpants are a signature on the social contract that reads "Mybutt Yerface, Esq." In your most honest moments, they're all you would ever wear if you had to wear pants.

CORDUROYS. Only fun because brushing one leg against the grain and then smoothing the other out around a person with OCD is the quietest, nonviolent form of torture you can ever engage in against another human. Corduroys are made of rejected pie crusts. One time a man in corduroys thought about sitting down. He exploded, and is dead.

TRACK PANTS. Cousin Niko Bellic America is the land of dreams you just have to out and take it preferably with a rocket launcher--

Thanks to Jon and Janie for important pants contributions.