A YOUNG STEVE SPURRIER HAD HIS WIFE "TRAINED RIGHT"

Tom Keiser of the Classical (and other illustrious internet places) brings us the first part of a series on the young Steve Spurrier, whose development included a period as an orange juice-slangin' pitchman and "promising young NFL QB." Spurrier would end up being known more for his punting in the NFL, but he probably still drinks fine, fresh-squeezed Florida orange juice. Enjoy, and follow Tom at @keisertroll on Twitter.

Steve Spurrier may now be one of the most legendary football coaches of all time, but a long time ago, he was among us mortals, doing what he could to get his name out there. At one point, that even meant starring in a filmstrip for the Florida Department of Citrus on behalf of frozen concentrated orange juice. What follows is Steve Spurrier’s connection to the Anita Bryant/Trading Places Illuminati.

Design For Winning is thirteen minutes of fantasy, disguised as a filmstrip used to promote orange juice. It dates from around 1970; coach Ray Graves had already retired to the U of F front office but hope remained that Spurrier would be something more than a punter and a glorified NFL backup. The Gatorade mythos was still in its infancy, so you could still get away from claiming that three square meals and a quart of orange juice a day would help you lead the Florida Gators to victory. John Reaves would soon add alcohol, cocaine and quaaludes to this mix, at least during his professional days.

Were Spurrier around today, he would’ve been a scrawnier, watered down Tim Tebow. More precisely, had Tim Tebow been born forty years earlier, he would have been a less humorous, more pious Steve Spurrier. Either way, they both would be selling Jockey underwear. Spurrier’s NFL career is surprisingly Tebow-esque. As the #3 overall pick in the 1967 NFL Draft (one ahead of Bob Griese), you could have said the San Francisco 49ers were grooming him to replace aging starter John Brodie. Brodie went on to play seven more seasons, winning the league’s MVP in 1970, and leading the Niners to NFC title game appearances in 1970 and ‘71. And who says Dianetics doesn’t work?

Hampered by the lack of free agency and an aversion to playing in Canada, Spurrier did the best he could, filling in for Brodie when his thetans got the best of him, and by being a decent enough punter for half his stay. This is how Spurrier saw time in the 1970 NFC Championship Game. Although Spurrier helped lead the Niners to the playoffs when pressed into duty in 1972, his playing career peaked, and by 1976 was the starter of the 0-14 Tampa Bay Buccaneers. 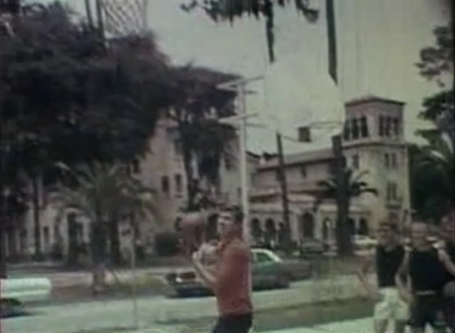 So when Design For Winning was made, one could still make a case that Steve Spurrier the quarterback was going places. Most of the 49ers footage comes from around 1969, when John Brodie’s tendonitis gave him enough time to associate himself with the works of L. Ron Hubbard. It also gave Spurrier the opportunity to upset the Baltimore Colts, perhaps the highlight of San Francisco’s 4-8 campaign.

Like all 25 year old former Heisman Trophy winners, the Spurrier of Design For Winning rests on his laurels. There are quite a bit of scenes of him leading Florida to victory, including his Orange Bowl win against Georgia Tech. What few remember about the 1966 college football season is that Miami, with absolutely no sign of its post-Schnellenberger swagger, was ranked higher in the polls than Florida, who finished 11th in the UPI polling and out of the AP Top 10, and even beat them head to head. Losing to pre-swag Miami was about as embarrassing as losing to today’s swagless Hurricanes.

There are plenty of teaching moments in Design For Winning, such as when you learn about the dropback pass and the rollout, the only two plays a quarterback will ever need. The sideline cut is performed by a receiver afflicted with what future generations would call "jazz hands". You also get to see Steve Spurrier in all his athletic forms, from barely getting in a layup on the basketball court, to missing a Bob Barker-level putt on the golf green.

While modern sports drinks were born from the University of Florida’s research around this time, Coach Graves and Steve Spurrier were clearly in the tank for Big OJ. Loving wife Jerri makes a cameo buying orange juice at the local grocery store; Steve says he has her trained right. Spurrier talks about OJ as if he was a contemporary Jesus Freak: "I got on this Florida orange juice kick back in the university." And even Ray Graves drinks the orange juice Kool-Aid: "It’s been proven that drinking orange juice cuts the losing to a minimum." Spurrier and Brodie might have each been espousing dogmatic beliefs in the early 1970’s, but at least Steve’s goes well with toast.

Until you realize this is Florida in the early 70’s, it’s hard to grasp how dated Design For Winning must have been for most of America even then. Absolutely no hint of the decade which preceded it, be it through countercultural change or progress in civil rights, seems to have made its way to Gainesville. NFL Films footage is used, of course, but the rah-rah marching band soundtrack of generations past dulls the splendor. The quality of the filmstrip itself also lends an Instagram quality to it, but here, the poor preservation of media is genuine.

Steve Spurrier was building towards his destiny to coach the Tampa Bay Bandits, but on the road to success came obstacles which could not be overcome the way John Brodie overcame his. Spurrier would become an assistant at Florida, Georgia Tech and Duke before becoming the youngest head coach in USFL history, leading Duke football to actual success, and of course winning a national championship and SEC glory with Florida and later South Carolina.

There were many things Steve Spurrier had to do to get to where he is today. Starting his day right with a big glass of Florida orange juice might have been the most important.