A HECKUVA ENGINEER I HATE YOU ALEX TREBEK

Share All sharing options for: FINAL JEOPARDY WAS A COLLEGE FOOTBALL DISASTER

This was the final question on Jeopardy on March 4th:

You sometimes forget the big picture, i.e. how life might look to the vast majority of Americans, those who somehow in their passage from the cradle to the grave do not feel the sweet caress of college football. They're out there, and they're the terrifying silent majority, doing things like still buying music heard on the radio and naming their children "Jayden."

But these are Jeopardy people. Smart people. People of such defining taste they question their answers, and use a tasteful hand-held buzzer instead of some grotesquely proletarian buzzer. When asked about one of the most recognizable mascots in college football, surely these bright young minds would leap to the answer and receive the firm, almost-approving Trebekian nod. 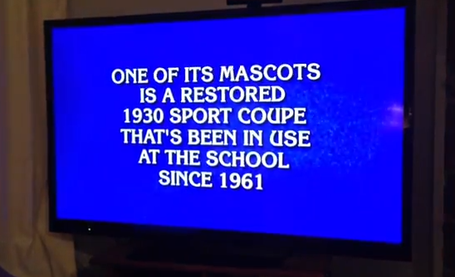 "A bit unusual to consider a car a mas-coot." Oh, we hear the Canadian condescension in your voice, Alex Trebek. Surely Erin won't fuck it up-- 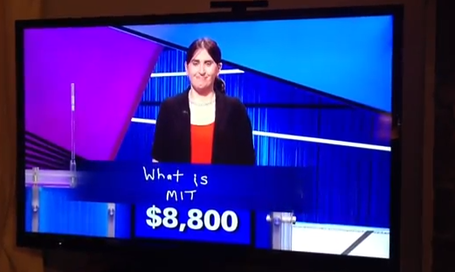 ERIN YOU BLITHERING BAG OF ORGANS AND WASTEWATER. MIT's mascot is Tim the Beaver, chosen because beavers are industrious and, like many students at MIT, have to file their foreteeth down to keep them from growing through their lips.

The next man--a man, who by probability has a higher chance of watching football--has a name that sounds something like "Dial and Went." He will answer this easily and--- 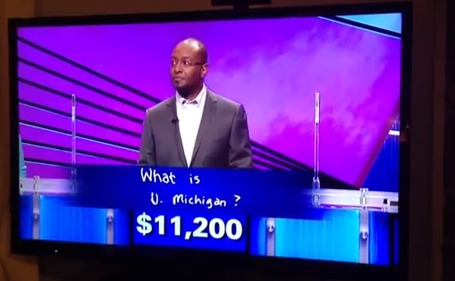 Goddammit Dial and Went. You had such promise. You made a guess a clumsy robot would have made, because Michigan does make cars, and Jim Delany is crying now. He's in the corner crying into this cheap scotch and you are the one who made him do it, Dial and Went. Goddamn the giant empty skullquarium that gave your mother and now Jim Delany such pain.

At this point we now want Sara, who according to Alex "really struggled with this" question, to just get something close, since we're all but sure she's going to take this layup, pick up the dribble, and fire a bounce pass directly into a screaming child's face in the second row. 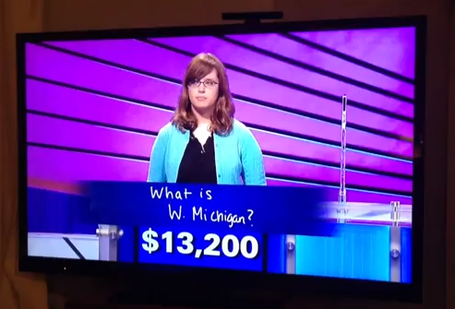 SARA YOU DISRESPECTED THE MAC YOU BLIGHTED WASTE OF OXYGEN WEARING A TEAL CARDIGAN.

To top it off, Alex says "the rambling wreck...and a heckuva engineer," because Alex Trebek is as much a representative of Canadian brilliance as Carson Daly is for American intellectual prowess. None of you win anything, this studio should be burned down, and Paul Johnson is waiting outside your house with a flamethrower.