THE CURIOUS INDEX PLAYS THE LORD OF THE PITT CARD

MAGIC, THE PANTHERING. Per a Twitter revelation last night, please recall that ESPN did show "Magic: The Gathering" tournaments as part of their broadcast day. "And he draws 'ball lightning.' KABOOM." Then @iamspilly made this, and everything got very confusing. 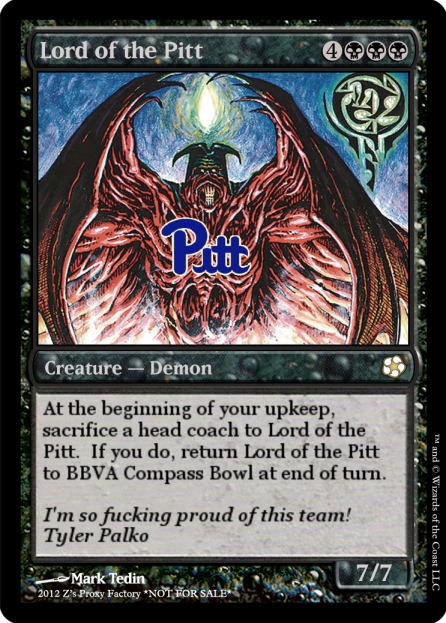 Pitt recent stretch of quarterbacks remain a unit ranking among college football's most cursed provided they stay in PIttsburgh. (See: The Flacco Exemption.) Tino Sunseri, Bill Stull, Pat Bostick, and oh lord, Tyler Palko--poor, sweet Tyler Palko, last seen twitching beneath a pile of Utah defensive linemen in the 2005 Fiesta Bowl. Never, ever play the Lord of the Pitt card in the 21st century unless you plan on transferring to Delaware.

MASTER SPRING SCHEDULE IS HERE: Washington is among the teams starting spring practice today, and you might even be able to tweet about it like people in the 21st century are supposed to be able to do.

T.O.B. WEARS BITTER PRETTY WELL. Getting the UVA moving fan to roll in and get your stuff is, well, it's exactly what we want an angry, catty T.O.B. to be.

THAT'S JUST THE BAMA COMIN' THROUGH YOUR SKIN. Someone got this tattoo, which over its lifetime will get two dollars of federal welfare for every dollar it pays thanks to it being in Alabama. We have nothing negative to say to that because mock Alabama's fraud-based economy if you will, but it's working like gangbusters for them. (Because: more money for sweet deathy Bama tats, y'all.)

USC IS A BIT LIGHTER THIS MORNING. Four players are gone from the team, including alley entrepreneur TE Junior Pomee. Oh, and in other USC news, Tim Floyd said Pat Haden talked to him about the basketball job, i..e the one where a previously employed Floyd admitted to paying allegedly paid O.J. Mayo in cash money from his very own hand. Sometimes you get the feeling--the heretical and halfway accurate feeling--that Lane Kiffin might just be part of a larger institutional problem at USC.

BUT WHY ISN'T HE FOCUSED? Johnny Manziel's all-access tour of a day at TAMU is brief and not all that revealing save for the total lack of vegetables on his plate, indicating that if Johnny Manziel were really taking his job seriously he'd have some goddamn cruciferous vegetables on the plate. <---complaint made by a fan eating a plate of steak fingers with extra gravy.

ETC: Healthy options at Cracker Barrel would be like Cracker Barrel not openly discriminating against gay people: it's positively unTennessean of them to even consider it. WU-TANG AND NDT 4EVA. Joe Flacco's pretty excited about money.