THE LES MILES AFFAIR: A LOVE STORY THROUGH TIME

LES MILES DID HAVE AN AFFAIR. FOR AMERICA. IN 1814. IT AIN'T CHEATING IF YOU HAVEN'T BEEN BORN YET.

Share All sharing options for: THE LES MILES AFFAIR: A LOVE STORY THROUGH TIME

I fear for the reputations of those involved, and thus feel bidden to speak about the unspeakable, and about the passions which from time to time blow through our lives like nor'easters of the soul.

Rumors without truth are poison. Yet in truth we must find our antidotes.

September 1814 brought with it terrible turmoil. The Presidential Home was burned before our very eyes. I fled with James to new quarters leaving behind Washington and its turmoils. James was fretful and worried, having little time to take his hands from the wheel of the ship of state to do much of anything, much less put them on his wife. Difficulties were upon the union--both our nation's, and my own with James. 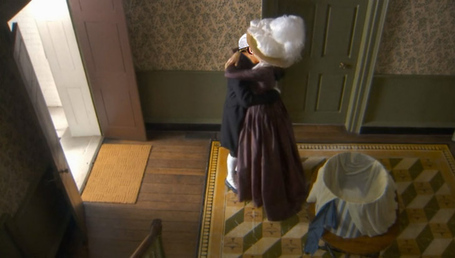 I had heard tales of the men of Ohio, and of the bounties frontier nutrition endowed on those who survived the traumas of childhood. They were not lies; he stood taller than any man I knew. His eyes sparkled like those of a freshly fed hog, and his hair shone as an unnatural shade of reddish-orange.

His speech was strange--intoxicating, even.

I had no idea what this meant but I did little to stop him. His foreign tongue bewitched me as the barreling sounds of the Frenchman's syllables do mystify the countless ladies whose virtue disappears on the Champs Elysees.

"You, uh...you gotta Jimmy John's here? I'd love to buy a lady like you a fine sandwich. The sandwich is the food of friendship, the thing, you know, the bread and the meat together, something which special that really is altogether."

I went with him. Dear reader it concerns me to be so candid with you but from that instant I felt within my breast the swelling of love. I loved this man who treated the words of English like a blacksmith would treat fine china, and loved him from the start. I followed him away from war, from fire, and from my tiny husband into the arms of this bear from the Ohio woods.

To confess to this is painful but believable. The heart wanders and often the body follows with it in the course of even good unions between man and woman. What may not be easy to take as fact may be this: that I have traveled time, and done so with a man--what a man!--who reaped a fortune coaching a regimented children's game in what I'm told is the malarial wastes of the Louisiana Purchase.

And I have seen it, dear reader, undoubtedly in disbelief reading this in the days just past my departure from this world.

I cannot explain his sorcery. Neither could he, simply saying that one day he had taken his usual constitutional swim in the mighty waters of the Mississippi, dove down to test the capacity of his lungs, and simply resurfaced in the year of my living, 1814, bearing the loose shirt and dirty breeches of a tradesman.

"I just popped up like a cork and whammo--hello old stuff!" 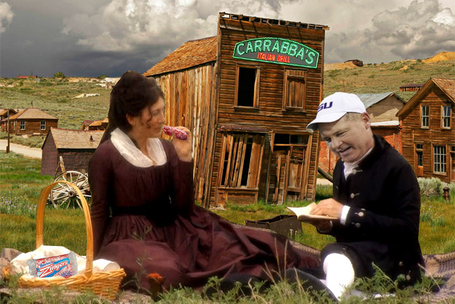 He could move freely between the two, and hand-in-hand so did we. He showed me the wonders of the modern world in his Rouge Baton, a place confirming my suspicions that the course of history is but a straight line from sorrow to progress. Its streets mostly free of carrion and feces! Its light humidity, so much gentler and more pleasant in climate than abysmal Washington, D.C.! Its astonishing collection of vehicles and "au-to-mobiles" festooned with rubber testes!

Leslie would merely tour with me there. We rarely enjoyed the act of intimate congress in that time because "it's not cheating if my wife or me hasn't been born yet." There were times when we did, but Leslie himself confessed to habitual ignorance of the clock and its demands.

"You people gotta shitload of mules," he would say, walking down the streets of barbarous Washington like a babyfaced ogre. 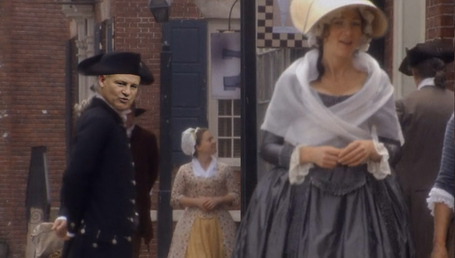 At times he would simply appear without swimming--in the room, late at night, wearing odd yellow and purple clothing, and speaking into strange earmuffs.

"Dammit, not again," he would curse.

"Leslie, my love, what is the trouble?"

He would try to explain in his dog's English that at times his soul would simply depart and reappear in 1814. These times would coincide with times of great and present necessity, when he himself would need to manage time in the children's game he played. He would try to explain something, anything, and instead sit dejected and tell me how his body was alone, sitting two centuries away, going mute as a clock I would never see was running his fortunes dry.

"Right now there's me just standing there not taking a timeout. Again."

I would try to comfort him. Before he would disappear, he would always ask for cakes, and no matter how many times I explained to him how foreign baking was to me, he would persist in this request. He would panic for hours on end, his world collapsing by second as we whiled it away by hours.

Then he would vanish, returning to his panicked, magical world.

I would not ask your pardon for any of this, nor for the pleasures we experienced together. Indeed I would not want it. In time we still may be together, since somewhere in time Leslie--my dear, incoherent, barrel-chested swine of a man--is looping back to visit me.

And know that. Should you judge him, in that moment of confusion when he appears vacant, he is giving me the strength to hold this young country together while my dear, sweet, and often unconscious-with-drink husband is slobbering on the becarpeted floor of his offices. By day I held the American family together, but who would hold me together at night?

Leslie Edwin Miles of the Ohio Territories performed those tasks, an office I should never want him to resign, neither for the country's sake in that crucial moment, nor for sake of the memories of this dear old heart of mine.

And that is no rumor, reader.