SYRACUSE MAY BE IMMUNE TO THE ADIDAS POX

IT MUST END AND IT STARTS IN SYRACUSE

Share All sharing options for: SYRACUSE MAY BE IMMUNE TO THE ADIDAS POX

Adidas has committed a long list of corporate atrocities: the Nebraska "Noid" variation, assorted molestations of the classic Michigan unis, several disasters involving Notre Dame, and this, the Wisconsin uniform so hideous Bret Bielema left the school for another job. Shut up. That's why he left, and if you argue, we'll just keep showing you this picture. 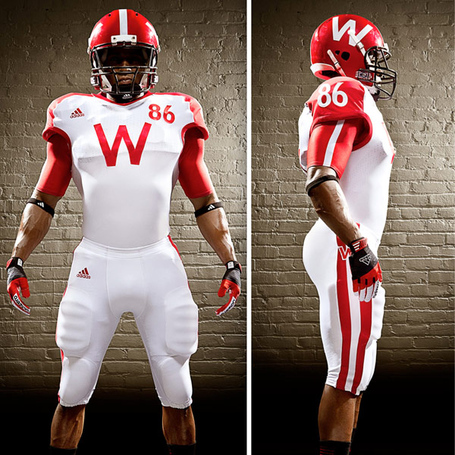 Notice that even the model appears to be flinching while wearing it.

Syracuse may be the first school to develop antibodies to against the Adidas pox. They claim Adidas' entanglement in a nasty Indonesian labor dispute has put them in violation of their contract with the school, and that not paying 2,500 workers in a third-world country while selling jerseys for hundreds of dollars a piece is somehow not consonant with a university's mission. There is a comment to be made about the immense irony of universities protesting unpaid labor by corporate athletic partners and we just made it.

But whatever, person with actual human concerns here. The really important thing here is that Syracuse clearly understands the threat to the human eyeball: Adidas armed with the primary colors orange and blue, and with the school having virtually no say in whether they have to foist them on an unsuspecting public. It's unusually quick action for a team that let Greg Robinson coach football for four years, but we'll take it.