THE SUNBEAST EXPANDS AND DESTROYS ITS ENEMIES

ALL PART OF THE PLAN, SUNBEAST

Share All sharing options for: THE SUNBEAST EXPANDS AND DESTROYS ITS ENEMIES

Appalachian State and Georgia Southern are both bound for the Sun Belt Conference. And on the same day, the Georgia Senate ratified an attempt to move the state line ever so slightly northward to grab more of that sweet Tennessee River water gold. These may seem totally separate to the casual observer, but as a longtime #SUNBEAST observer, we assure you that the two are intricately connected.

You just have to connect the dots, patriots. 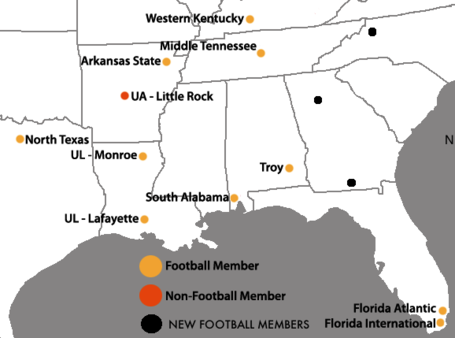 The SUNBEAST adds Georgia Southern and App State, two programs seemingly poised to make the leap to FBS football, but also located at key points in the SUNBEAST's grand plan. App State forms the third point in a triangle surrounding the Tennessee River's most valuable point, i.e. the contested area where Georgia wants to extend its water rights and thus keep the golf courses of Atlanta green through the worst droughts.

Georgia Southern secures the halfway point on the pipeline out of Georgia, and to the SUNBEAST's port facilities in South Florida.

FACT: THE SUNBELT HAS HAD DRONE TECHNOLOGY FOR YEARS AND WANTS TO TAKE YOUR GUNS! THAT'S WHY ARKANSAS STATE HAS A TREE STAND! THEY'RE OUT TO HUNT YOU!!!! 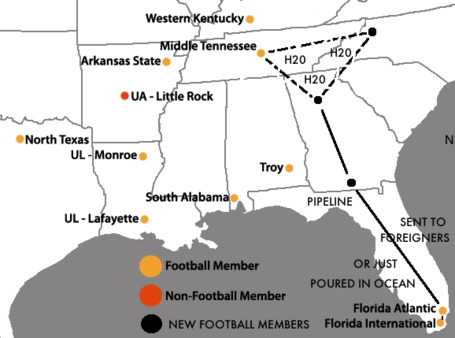 Having established control via their base in recent joinee GSU to control the GA legislature, they then seize the water by buying off the Georgia Legislature. This can be done for seventy dollars. It happens all the time.

FACT: DID YOU KNOW THE SUNBELT BOUGHT A BILLION ROUNDS OF AMMO LAST WEEK? WHY? WAKE UP, SHEEPLE?*

*For a t-shirt gun, yes. BUT THOSE THINGS CAN KILL IN THE RIGHT HANDS.

With the easiest step in the entire procedure--buying the Georgia legislature--under their belt, the SunBeltinatti can move on to the third step in their plan to assert dominance over those who have wronged them. 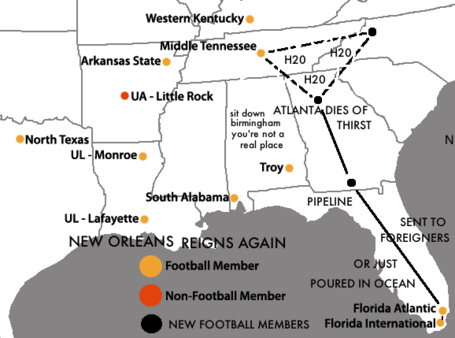 With Atlanta's water taken and sent either directly into the ocean or into the filthy mouths of foreigners, Atlanta shrivels, and the ultimate goal of the Sun Belt's grand expansion plan is revealed: restoring SUNBEAST headquarters, New Orleans, to its former position as the Queen of the South, destroying Atlanta, and sit down, Birmingham, you're being silly no really sit down.

FACT: NO ONE HAS EVER FOUND HOWARD SCHNELLENBERGER'S REAL BIRTH CERTIFICATE. PERHAPS BECAUSE HE NEVER NEEDED CERTIFYIN' FROM ANYONE. BUT STILL.