Share All sharing options for: AN ALABAMA FAN BEHOLDS THE CRIMINAL JUSTICE SYSTEM

There will be no trial in the Harvey Updyke case. He plead guilty today. 3 year prison. 5 years probation.

Well, I ain't one to stand between the law and those who tread in its path. No one's perfect, and lord knows that includes me, but when it's time to face the music there ain't an earplug in the world that'll drown out that song. Harvey's a lawman, but he ain't above the law, even if he's only guilty of having too much Bama in him, and too much Spike 80DF in his truck. It's hard, but it's fair, Paul.

After pleading guilty, Harvey Updyke is also banned from Auburn. Has already served 104 days of jail sentence & has 76 more.

Well now that's just the court bein' kind. Ain't no reason anyone should ever be there anyway, so havin' the law make you do what instinct should be tellin' you is just redundant now c'mon ROLL TIDE.

As part of the plea deal, Updyke's probation will require him to abide by a 7 p.m. curfew, and he is forbidden to attend any collegiate athletic event. He is also banned from entering any property owned by Auburn University. Updyke is also ordered not to speak with any member of the media. 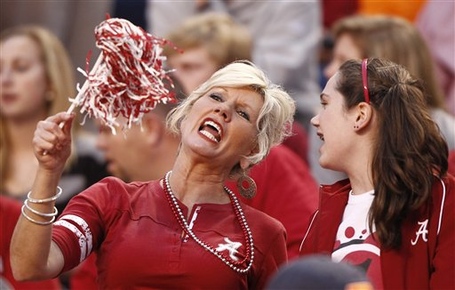 AT LEAST HE SAYS IT'S ANDROGEL.

IT MIGHT JUST BE VASELINE SOMEONE'S SELLING HIM WITH AN ANDROGEL LABEL.

ANYWAY YOU CAN'T TAKE IT AWAY FROM HIM ANY SOONER THAN YOU'D TAKE AWAY THE AIR THE SUN OR HIS CABLE TV. THEY'RE ALL FREE OR AT LEAST THEY ARE AS LONG AS MY NEIGHBOR DOESN'T NOTICE THE WIRES MY HUSBAND SPLIT OFF SEVEN MONTHS AGO. BEST DECISION WE EVER MADE BUT IT WOULDN'T KILL YOU TO GET SOME DAMN HBO. DRAGONS AND TITTIES SHOULD BE FREE, TOO, SO GET TO CALLIN' TIME WARNER BECAUSE POWERFUL MIDGETS ARE KIND OF OUR THING NOW.

SO YOU SAY WHATEVER YOU WANT YOU DAMNED OLD ACTIVIST JUDGE. WE'LL HIDE HIM. WE'LL SMUGGLE HIM INTO GAMES. IT'LL BE LIKE SPARTACUS BUT WITHOUT THE GAYNESS. SOMEONE WILL ASK "WHO'S HARVEY UPDYKE?" AND WE'LL ALL SAY "I AM" EXCEPT FOR HARVEY, WHO'S SO STUPID HE'D PROBABLY SAY "ME! MEEEEE!" WHILE SHOWING AN ID.

A concerned Alabama fan (who wishes to remain anonymous because "stealing" cable is another thing your "laws" are wrong about, Judge DMX on a Horse)