THE IDEA IS JUST ANTI-AMERICAN

There are things the southern portion of the United States is bad at historically: reading, organized zoning of city land, civil rights, being thin in non-poverty scenarios, and...and a lot of things, actually.

Yet despite those incompetencies, some positive universal historical strengths have emerged, with none being more clear than this: when it comes time to celebrate something with benign vandalism, those born in the south know precisely how to do it. You get none of the sloppy runover you see in Philadelphia fan riots, nor the random stabbings that accompany Los Angeles championships celebrations. No one's going to riot over hockey ever, and especially not in the weirdass HOLY SHIT, VANCOUVER GETS AGGRO WHO KNEW kind of way Vancouver did it. 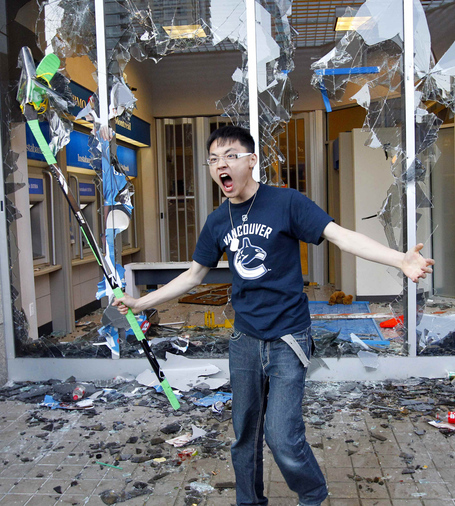 Instead, what you get in most SEC celebrations is hooting, hollering, and then perhaps a few poorly executed fan-fights before everything disperses to the bars. Thus do we find the failure of the hivemind here to be so disappointing, Auburn:

"The poles may be there for at least a couple of football seasons. It’s my understanding that once they get the transplanted trees there, they don’t want people to roll them for maybe three years. So we may be looking at two or three football seasons."

Dammit, Auburn. Rolling things is on that short list of things the South is supposed to just be innately good at, and planning is antithetical to the entire exercise. We know you had the symbolic heart of the university literally poisoned by a deranged Alabama fan, but what hasn't Alabama poisoned at one point in its history? It's what they're designed to do, and you shouldn't have been surprised.

The point is that if you are from the South, or Southerners, or whatever you want to call what you are, you do not roll the pole you are given. No, hell no, and haaiiiil no: you stride right past that and festoon the nearest thing you are NOT supposed to roll: a law enforcement officer, a national monument, a passing endangered bird of some sort seconds away from being shot by a nearby hunter...anything but the thing you are supposed to use.

Just go out and roll something, dammit, and plan none of it. That's not just the southern way: it's the American way. (P.S. the southern part is if you roll something and it catches fire, and you raise a fist and holler and then run before the cops get there.)