SEC BASKETBALL FEVER IT'S A DISEASE DON'T CATCH IT

WHAT IS A BASKETBALLS

Share All sharing options for: SEC BASKETBALL FEVER IT'S A DISEASE DON'T CATCH IT

There is a very simple test to determine whether you are an SEC basketball fan. First, answer this question:

The rest of you are like us in that you are horrible, terrible people whose ears may not even register the words "SEC basketball" as a real term not made up by a neo-prog rock band randomly colliding words to conjure up spectral, unreal landscapes of macabre fantasy. This is a very literal comparison. Take this list, for example.

Sandwiched somewhere in there is an SEC basketball team's name and record. Like a colorblind predator, we cannot see it. It seems no less fantastic to us that the words "A Horse Called Golgotha," and certainly no more real.

We have no idea if "The SEC is a bad basketball conference" because we don't know "IF: BASKETBALL." These are all real true confessions we made without resorting to looking up names or facts.

Fact one: The rules of basketball are simple. 50 cents get you six throws. Each throw can earn you between 0 and one hundred points. You get one ticket for every 30 points, and high score gets a free game. Here is a picture of a basketball court.

This is a picture of a basketball court: 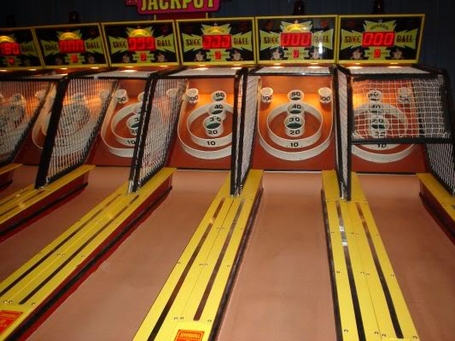 Fact two: We really only know the names of five SEC basketball coaches off the top of our heads. Billy Donovan won two national titles at Florida, so we have to sort of know that. Frank Martin is at South Carolina, and if you look like a Romanian serial killer and wear cowboy boots that makes you memorable enough for the hard drive. John Calipari is gloriously sleazy at Kentucky, and we know Cuonzo Martin at Tennessee because his name is "Cuonzo" and he replaced another gloriously sleazy coach, Bruce Pearl. There is a Frank Haith person at Mizzou, and we only know him because he coached at Miami and thus probably killed someone at one point in a Mexican standoff.*

*True of all Miami coaches in any sport.

The rest are a complete loss. You would be amazed how little this has affected the quality of our life. We can't even identify the arenas, though we know Vanderbilt's is weird because it has a moat or something around it. Figures, what with the evil aristocratic tendencies of those in the West End of Nashville.

Fact three: Kentucky's good at it, a fact so strange it sort of put the rest of the SEC off ever really pursuing it seriously, ever, in any fashion. (Because look where that's gotten them.) You might as well be a champion at Unicorn Dressage.

Fact four: Prior to a week ago, we could name one player on the 2013 Florida basketball team. That would be Will Yeguete, who we knew about because a.) Yeguete is fun to say, and b.) everyone on Twitter was really distressed about him being injured. Other than that, we simply referred to anyone on the court by their unchanging universal archetypes:

Fact five: We're not alone. A lot--a loooooooooooooottttt---of diehard SEC fans seriously know absolutely nothing about their teams, and in fact might have never attended a single game in their undergrad or post-grad lives. In our entire time at Florida, we attended one game. That's one, as in one more than the total number of Georgia Tech football games we attended while in grad school. We haven't been to a single one as an adult, not even when Florida was really good at it and winning titles, not even when they were right down the road in Athens on a road trip.

Fact seven: We'll never, ever feel bad about this. It's like trying to make Kansas fans feel bad about not being football fans in that you are asking a dog to feel bad about its pisspoor understanding of Kantian deontology. It is a dog. It will never understand this, and can't possibly feel bad about something it could never even recognize as a value. College basketball is the bone made of balled up one hundred dollar bills that we bury in the yard and forget about completely. You see money, and our brain sees mediocre dog bone to perhaps chew on for a week or two before losing forever.

Fact eight: That's okay. It's okay because Kentucky and Kansas need to claim something positive in life, we suppose. The Big Ten's allegedly really good at it this year, and that's great! We don't even mean that sarcastically! That's great, and we hope you annihilate whomever you face in the NCAA tournament. Don't try to trash talk us about it, though, because we have no idea who is going from the SEC besides Florida, who is allegedly pretty good. With that Yeguete kid. And the other guys. Like the tall swatty guy, and the three point shooter. Never mind us. We'll be in the back yard just chewing on a dogbone made of American currency, waiting for fall.

Fact nine: Wait, wait, we almost told you everything we know about SEC basketball.