THE OFFSEASON IS MISERY, PEOPLE.

Run Home Jack and ourselves attempted to watch the cornerstone of the Notre Dame legend, "Knute Rockne, All-American." It is a fucking terrible film, and you should never watch it.

RHJ: The film begins by crediting reports of Rockne's "intimate associates." Ah, simpler times for America, when we had kinder terms than "fuckbuddy."

SH: It's okay. We asked people who existed before the advent of antibiotics to use their clap-addled brains to remember details about things they were likely stinking drunk for to remember for the movie. Then, we just wrote down what Knute and his family wanted in the film.

SH: Lloyd Bacon, a British director, made this film. He also made 130 others in his lifetime. Lloyd Bacon must have fucking hated movies.

RHJ: We're three minutes in and a child is casually using a hand saw while three adults give zero fucks. Norway, yo.

SH: "I like what I hear about America...and about opportunities for working men like me." Do Notre Dame Fans know Knute Rockne's dad was poor? Don't tell them, they'll turn to dust. Dad's pissing on Norway pretty hard.

SH: The football scene in Knute's neighborhood growing up has a black quarterback in the single wing because RACISM.

RHJ: KNUTE ROCKNE, Linebacker, Chicago, Illinois. Terrible stance. Late off every snap. Does not pursue so much as has the ball carrier run into him. No lateral movement. One star recruit.

SH: The Manti Te'o of his time. Rockne is knocked unconscious and continues playing, and children suggest they leave his body for the cops.

RHJ: I have been hit with the "AMERICA" hammer too many times. Poor Knute only gets one offer, from the U.S. Postal Service Fightin' Return-to-Senders.

SH: Knute cleans and presses a bag of mail pretty well, the best piece of weightlifting an ND player will do until the early 2000s.

RHJ: At the USPS, Rockne really learns the value of hard work, efficiency, and casual theft that goes untraced. He finally decides to leave for college after approximately 30 years. 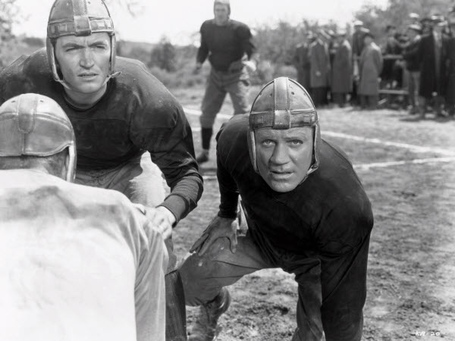 Not actually a scene from the hit movie "Grandpa College."

SH: Everyone in the past was 40 years old, and then eighty. That's convenient: the actor Pat O'Brien playing Rockne is actually 40 at the time of filming here. By the way, it is not creepy at all that Rockne's wife said O'Brien looked so much like Rockne that she expected "him to make love to me." Also creepy: priests talking about chemicals.

RHJ: For real. There's nothing about a priest saying "synthetic rubber" that isn't horrifying.
SH: The movies bro credentials are pretty strong, since Rockne passes up a chemistry internship to go wear men's casual on the beach. White people love wearing all their clothes on the beach, per 1930s Hollywood.
RHJ: I don't even get what they're doing here. The beach scene features people in swimsuits but Rockne and his buddy in pants and sweaters. Are they implying all the assholes not covered up are libertine state school graduates?
SH: HOLY SHIT THIS MOVIE REALLY CLAIMS KNUTE ROCKNE INVENTED THE FORWARD PASS. I can't decide whether lying about your child being gravely ill to motivate your team or this is worse. Then Rockne ruins his proposal of marriage talking about his gameplan against Army, which is the most realistic part of this movie.
RHJ: You can tell Rockne's wife is a Big Ten fan because she's bored to tears by a description of a passing attack.
SH: Oh holy shit the newspaper flying at the screen.
RHJ: "Boss Sanity Trial Jury Is Completed. 2 year old girl killed by auto in crossing street. Business man loses life on cabin cruiser. Killer escapes." These are all minor headlines compared to "IRISH TROUNCE SO AND SO."
SH: In the past, the entire nation was the SEC, basically. When you beat Army, a lynch mob of happiness showed up with torches to meet you at the station, so filled to the brim with glee were the citizens. 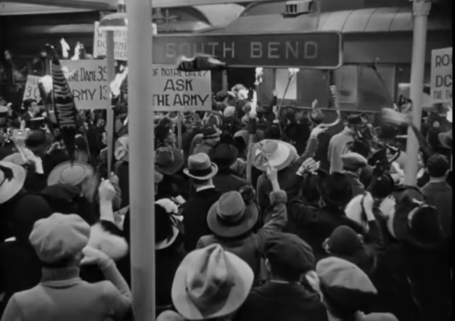 The funniest part of this: that the words "South Bend" were ever written in anything but spray paint, and without a question mark at the end. Knute then has a baby and acts excited, something no man was before the year 1985.

RHJ: Side note - in 1913: Wake Forest went 0-8. They lost to UNC twice, NC State, Davidson, and GALLAUDET. Has shit ever not been rough at Wake Forest?

SH: There is an extended scene where Rockne is sitting in the yard putting some mercury-laden bullshit on his head to get his hair to grow back. Per his wife: "You've worried yourself half-bald!" People in the 1920s UNDERSTOOD things, man.

RHJ: Here is what a priest says to Rockne, regarding the value of his coaching: "You are helping MANKIND." The wrestler, I presume.

SH: No, no, move over, Norman Borlaug and Louis Pasteur, Rockne's coming through and he's going to feed the Horn of Africa with the power sweep. Players visit the Rockne house and attempt to steal Mrs. Rockne's food, and claims she makes the best fried chicken in town. This being Indiana meant that this was probably just boiled chicken with corn flakes spread on it. Even then, it probably was the best fried chicken in Indiana, and still might be.

In part two we find out that doctors in the 1920s gave up on people really, really easily. 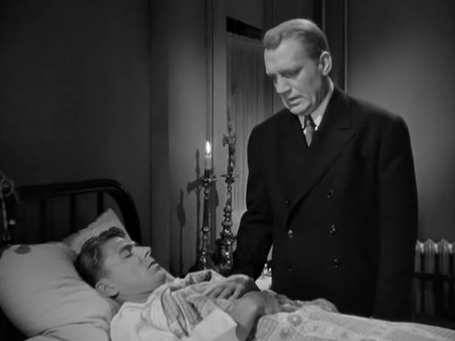 "He's dead. Or asleep. There's literally no way of knowing which one."