IT'S VERY EASY, AND INVOLVES SEBASTIAN THE IBIS

Share All sharing options for: THE MYSTERY OF RANDY EDSALL'S CHASE STORY EXPLAINED

Randy Edsall this week told the tale of him being chased through Belle Glade during recruiting season, a first for him, but probably not for many who have had the privilege of traveling through beautiful South Florida. Did you know one out of every three people in South Florida will be chased at night by mysterious men in trucks at one point in their lifetime? And that nine out of ten of them deserved it?

Edsall's account, which may be and should be read in full here, follows:

The pickup truck tries to rear-end us. The other car tries to go outside us. He says, ‘Call 911.’ So I’m calling 911, I’m saying, ‘Hey, I’m the head coach at the University of Maryland. I know where we are, we’re getting chased. We didn’t do anything. We need a police officer to come out here.’ We drive for two and a half to three miles with people chasing us. Finally we get to the light. Brian outran them a bit. We get to the light, took a right and they stopped following us because we got out of things.

This being a story from Belle Glade requires no explanation for us, but we understand if someone uninitiated in "Florida Things" needs some semblance of explanation. Fortunately, Freek is here to help with just such an explanation. Yes: Randy Edsall only drives golf carts, even on public highways. 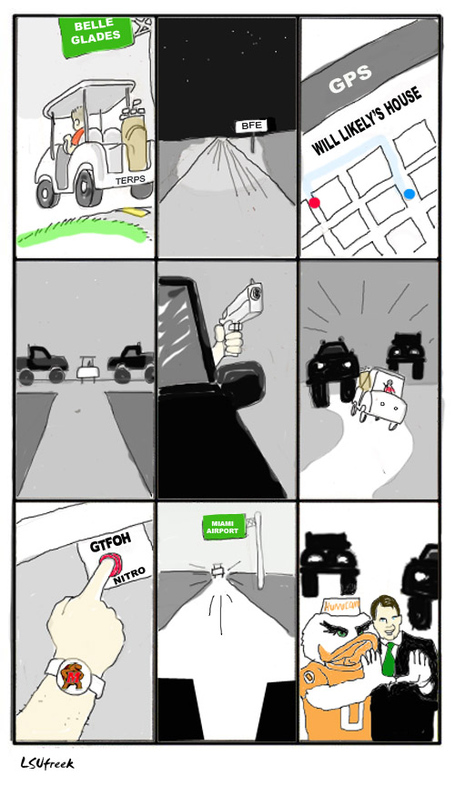 P.S. The part where Randy Edsall says "I'm the head coach at Maryland" to a Florida 911 operator as if that would do SHIT is our favorite part of the story.