YOU SCARY, ALABAMA. A'Shawn Robinson, please be aware that this may be the most normal Alabama fan you ever meet. 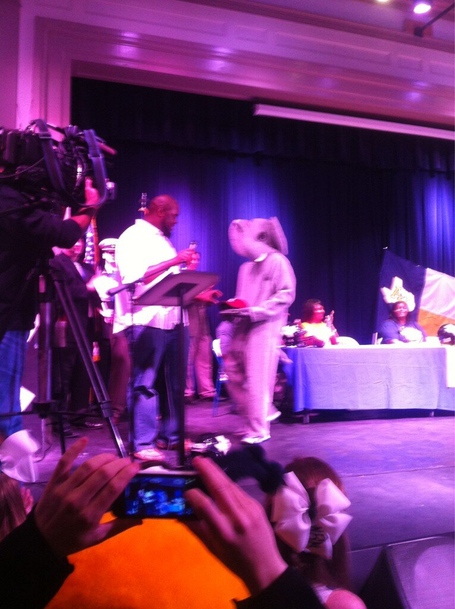 You may gawk at Ole Miss' curvebreaking recruiting effort yesterday, but do remember that the standard-bearers remain Alabama (who signed everyone) and schools like Notre Dame, Florida, and Ohio State, all of whom continued to rake in talented young men with intact and overdeveloped posterior chains for their football programs. We were particularly pleased with Florida signing five wide receivers, bringing our total roster total to FIVE WIDE RECEIVERS. This number is accurate and no you shut up it is.

"I have my usual workout at about 10:30, 11:30, a quarter to 12, something like that. I came back and checked on the faxes. I think all of them were in except maybe one that we weren't sure of. That was about it. I made a few calls here and there and talked to some of the guys. That was about it. That's about what I do. You're not going to see me doing a whole bunch of 'rah, rahing' on signing day.

NOT THAT IT DIDN'T GET AWKWARD. Because when coaches do television after getting fired, sometimes they have to interview the guys they replaced. You can stay in the corner, Houston, and just watch Hugh Freeze make sweet love to this ole miss here. Don't make it weird.

LET THAT BURN, OR AT LEAST GET WELL-DONE. Tommy Tuberville received a very special fax at Cincinnati from Texas Tech fans. Don't try to make excuses, Lubbock: any place that offers blueberry muffins as a side with a steak is a just a weird goddamn place to be.

LANE KIFFIN IS MORE OF A CURATOR, REALLY. USC only signed 13, and WHERE IS THE RAGE OVER UNDERSIGNING, EH? In other Trojan news, tight end Junior Pomee was arrested for felony receipt of stolen goods, and everything is just coming up Kiffin. (Fulmer Cupdate to follow.)

THE CULT OF SUMLIN ROLLS. We enjoy the contrast between Good Bull Hunting laying out seven degrees of Kevin Sumlin and Mack Brown blaming Twitter for his troubles.

THE HUMAN INTEREST DEPARTMENT REPORTING IN. Zack Golditch got a scholarship to Colorado State, which is great in general, and especially and specifically great because he survived the Aurora mass shooting in 2012.

ETC: So, soccer is fucked. Watch until the end for the best sarcastic "bravo!" ever.