READ THIS BEFORE ALEX COLLINS'S MOM GETS TO IT

Share All sharing options for: THE OFFICIAL EDSBS RECRUITING RANKINGS BECAUSE A TOTALLY SUBJECTIVE CHAMPION MUST BE CROWNED

The dust has settled on yet another Signing Day, and as these things go, an evaluation and ranking of the performances of everyone involved in order to declare a winner on a totally subjective, completely unscientific way must be done...as is our way in college football.

It's tradition. Unfortunately, the basic star rating system employed by the various recruiting services to do this type of thing is wholly inadequate for the type of in-depth analysis that goes on around here. Really Rivals, how do you properly quantify, in stars, the impact of a recruit bringing forth a live animal to assist in the announcement of his college choice?

It can't be done. So without any star-related foundation or consultation of a recruiting guru with the first name of Tom (they are all named Tom, even when they aren't), but still the type of arbitrary ranking system that can only come from watching hours of grainy high school football game film, I give to you the Official EDSBS Signing Day Rankings...

1. Alabama. Nick Saban is signing ALL OF THE RUNNING BACKS. ALL OF THEM. And he's converting his offense to a spread look. If by spread you mean lining up 5 running backs across behind the quarterback and running off tackle.

2. Lane Kiffin. Not USC, just Lane Kiffin...who, after signing only 13 players and having many targets in his class bail to sign elsewhere, said the following: "Our top 13 are better than anyone else's top 13...I don't think anyone can argue that." That's the type of creative arithmaticin', coupled with a 7-6 record, that'll get you fired...or as Lane Kiffin's career trajectory goes, will get you a lifetime appointment as the President Emeritus of Outer Space.

Once Mrs. Collins understands that her special brand of crazy is not only appreciated but expected among the good folks of Arkansas, she'll come right around on the idea of having her son attend school there. 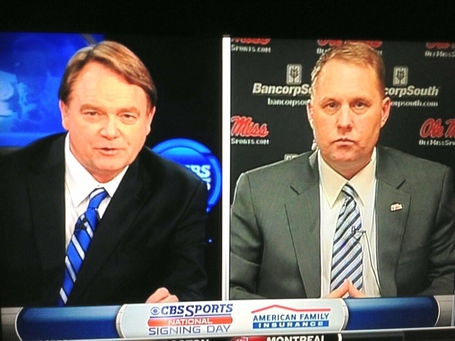 At this exact moment a Signing Day black hole opened and would have swallowed both men whole had it not been for the buoyant properties of Hugh Freeze's teeth.

5. Notre Dame: THEY'RE TOTALLY BACK YOU GUYS! 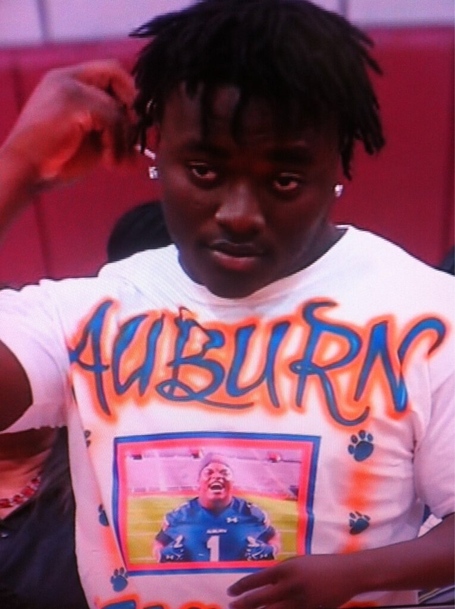 Committing to Auburn and keeping the Alvin's Island airbrush t-shirt business afloat at the same time.

7. Punter flipping. As Alabama and Ohio State were battling out for top recruiting class in the nation, Nick Saban was trying to flip Urban Meyer's punter just to be a dick.

8. Mr. Switchblade: Because it's always nice to include a cover letter with any official document of legal intent. 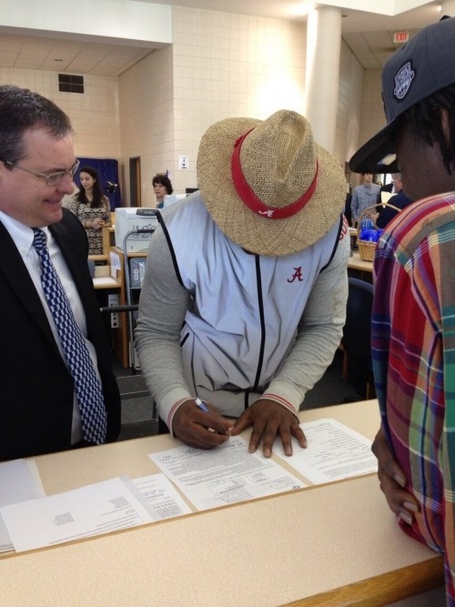 Dressing up like Nick Saban to sign your Alabama letter of intent is comical and is therefore just the type of bullshit that Nick Saban does not have time for as part of his PROCESS. Consider yourself banished to the scout team.

10. Kansas State: They signed nothing but JUCOs and high school guys you've never even heard of. Bill Snyder will see your punk ass in the Fiesta Bowl anyway, sonny.