ALABAMA HAS OVERSIGNED THEIR WEIGHT ROOM

Share All sharing options for: ALABAMA HAS OVERSIGNED THEIR WEIGHT ROOM 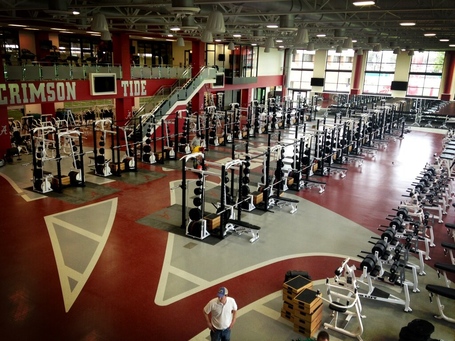 This may be the point where Alabama really and truly crosses some line from "football program" into "island fortress ruled by a shadowy man with an iron hand and squinty glare." Knowing Nick Saban, this isn't even the real weight room, but instead some clever decoy to make you think Alabama players "lift weights" like "normal people" and aren't "reconstructed by imprisoned North Korean super-soldier surgeons in a bunker eight miles beneath the surface of the planet." This is a warmup area for the men's diving team.

Meanwhile, this is the actual Kansas weight room.