YOU ARE SO LUCKY AND DON'T EVEN KNOW THE HALF OF IT. Behold: the ultimate NFL pregame show. 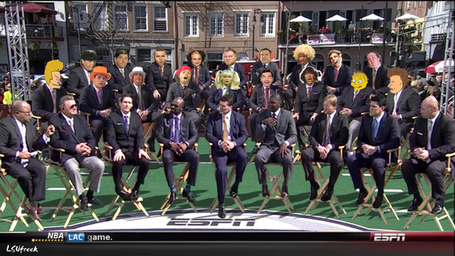 Just a thousand director's chairs and the same number of bellowing former players, all crammed onto the same stage forever talking about all the people they talked to that week who've been doing great jobs. You are so very fortunate to have a sport whose main commentators are coaches too weird to go pro for long, and player-commentators too slow to do anything but get cut from a practice squad and immediately begin a broadcast career. (See: Herbstreit.)*

*Don't ask us about Spielman. He's a physical and intellectual marvel that science cannot explain.

YOU GET A RECRUIT. And so do you, Alabama, in the form of Reuben Foster. Did you hear he had an Auburn tattoo? He does in fact have an Auburn tattoo. Meanwhile, Bret Bielema gets the five star kegger goin', baby.

YOU GET URBAN MEYER, YOU GET HIS LOATHSOME TASTE IN FONTS. Everyone hates Ohio State's new logo, but remember that Urban Meyer's heart is still in love with a Big Dogs shirt he saw in 1987, and all branding made since then has been an attempt to recapture it. (See: the platinum dickhead font we got under Meyer, and the interrupting Gator who looks like he's saying "hey HEY THAT'S MY DIPPIN' SAUCE.")

KENNEDY, KEATON, AND KAMDEN. Dave Yost, former brahsome offensive coordinator at Mizzou, was simply burned out when he resigned and left for a less demanding position coaching job at Wazzu. There is also the revelation that his three children are named Kennedy, Keaton, and Kamden, because "Dave Yost things."

EARS NOT NECESSARY TO BE A LEADER, LEGEND, WHATEVER. Northwestern's new quarterback recruit got a piece of his ear bitten off when he was three, and that seems like perfect practice for being a quarterback at Northwestern.

ETC: The Miami court system never fails to amaze. Don't talk shit to this man, ever, even if he is dead.