FULMER CUPDATE: TOO FULL OF BAMA

ALABAMA, AS USUAL, TAKES THE LEAD

Share All sharing options for: FULMER CUPDATE: TOO FULL OF BAMA

The Big Board as always is brought to you by Boardmaster Brian. He's been laid up in the Reggie Nelson Wing of the Men's Hospital of [CITY REDACTED] with a terrible sunburn on his manparts. It's hard to keep something that big covered completely. Awards and clarifications follow. 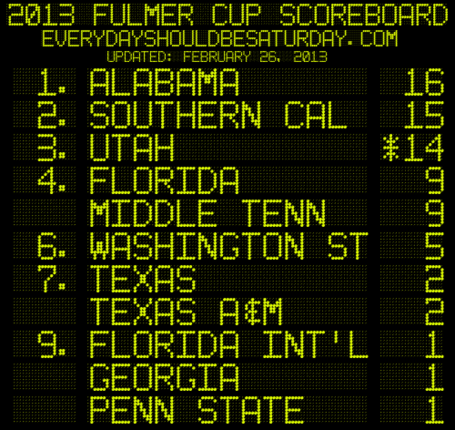 BAMA UUUUUUUUUUUUUP. Gonna be a banner week at Hank's Houndstooth, since it all goes half price when Bama wins a national title, and for this week Bama totally has the Fulmer Cup Late February BCS Title For Total Points In A Completely Imaginary Rating Of Program Chaos.

The Big Board is wearing houndstooth thanks to four players' arrests for, among other things, punching the daylights out of students and taking their stuff. We would like to repeat: rather than use any of the cunning or clever methods for theft devised by ingenious criminals throughout our history as a species, Alabama players Eddie Williams and Tyler Hayes decided to simply walk up to someone and wail on their skulls until they lost consciousness.

That's power football, criminally speaking, and enough to get Hayes, Williams, and conspirator D.J. Pettway second degree robbery charges. Additional credit card fraud charges--a class C felony in Alabama--take the total to five felony charges between the four men. Throw in the firearms charge Eddie Williams got the weekend before all this broke, and that's a standing sixteen point total for the Crimson Tide.

The arrests are making roster cuts for Saban easier than they should be, dammit, but when you're Alabama in 2013 luck just follows your ass around like flies to a shitpile.

MIDDLE TENNESSEE STATE. Tearin' the club up with a genuine clusterfuck of a bar brawl, because Sun Belt is the fun belt you wear on college football trousers. Three players given a shambolic mess of misdemeanors indicating hilarity and a deeply failed escape from the police put MTSU at a tie with Florida at nine points.

FLORIDA. Purifoy's pot charges have been dismissed completely, one of the few cases in which we'll reduce points. (Remember no plea deals considered.) Changes will be reflected in next week's board.

UTAH. A horrendous domestic violence case gets Utah fourteen points, but no team consideration since it was one player and one player alone who decided to resolve a domestic dispute by trying to electrocute the mother of his children in front of one of them. There aren't many hard and fast rules in life, but not doing that in any scenario ever seems like one of them.

UGA. Georgia continues to redefine minor points totals acquired in innovative fashion, since reporting a book stolen after selling it back to the bookstore is something we've never seen before, and probably won't ever see again. One point for Georgia, the team that redefined scooter crime and once got cited for "emerging from an alley."