We don't really know how this came up the first time, but it was probably Jonathan Franzen, and the thought of making something, anything happy out of Jonathan Franzen, ever. The first thought that came to mind was that Corona ad where the guy walks in, smirks, and announces to his friends at a bar table: CRUSHED IT.

And we thought of Franzen, miserable-ass Midwestern Jonathan Franzen, walking in and defusing the whole commercial, just rambling on to his aghast colleagues about failure, and the nature of failure, and then maybe a long digression about a talking turd. Then Franzen concludes by saying life is misery, and we should just get it over with, and that's really the only solution.

[FIND YOUR BEACH, AND KILL YOURSELF ON IT AND LET THE BIRDS PICK YOUR PASTY FLESH APART ON IT appears on screen]

So that's how we started to talk about which authors should shill for booze. 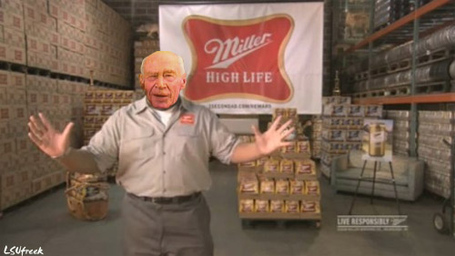 Henry Miller Time is the most obvious landing space, but it fits beyond the name. Henry gets to pal around all day, delivering beer and maybe having a few hot, frustrating dalliances with select store clerks along the way. Maybe lose a truck or two, explain to the boss he's been shanghai'd by some canny highwaymen before going back home, catching his old lady screwing Keith Stone, and going to get shithammered under a bridge with some of the finest people in the world. The night ends in a brothel, but it usually does when you live the High Life. 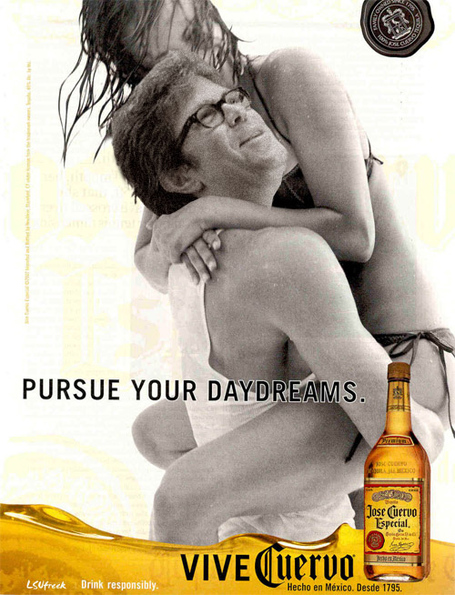 What makes Jonathan Franzen happy? Nothing. But the taste of Jose Cuervo Especial helps, especially on those long nights when complaining about the internet and the kids not caring about fiction isn't enough to keep him warm. 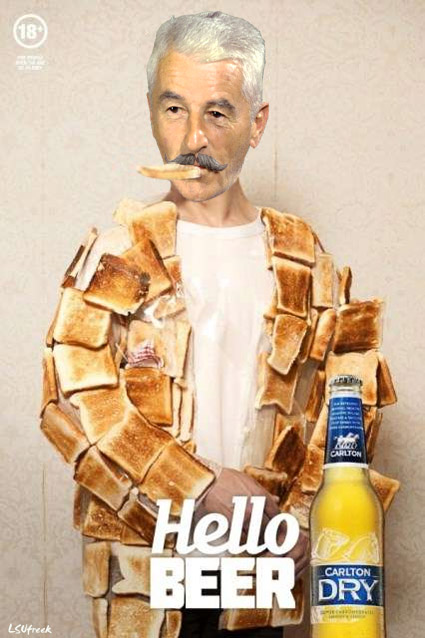 "My mother is a fish. My jacket is toast. And my beer is Carlton Dry." To know the tragedy of Faulkner is to understand that he really would have thrived in the internet era, since he wrote his best works underpaid, working another job, and speaking in the voice of half-literate savages while trying to make deadline. Twitter, however, would be a problem because 140 characters is a warmup for a Faulkner sentence, and no one wants to follow that shit. 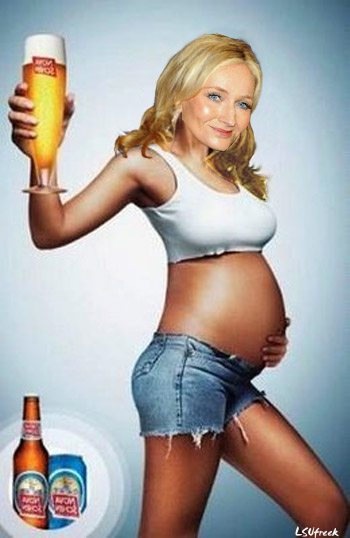 J.K. Rowling is the world's most successful English welfare recipient, so pregnant and and in a sports bra and cutoff jorts it is. WINGARDIUM BEVIOSA. [beer flies into hand across room along with darts, a bag of crisps, and an uncashed billion dollar check that was just sitting on the table] 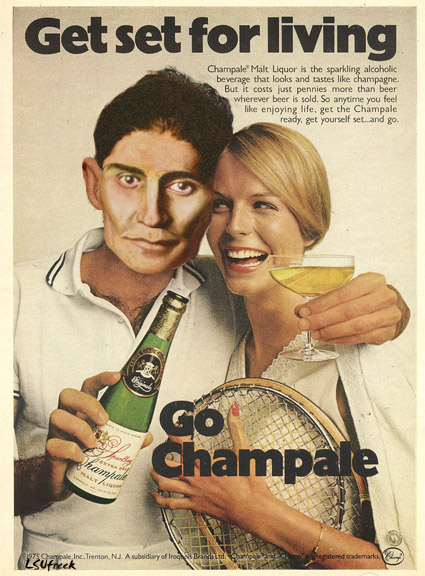 The experience of malt liquor consumption will turn you into a hideous creature overnight. We read Kafka's letters in high school, and reading this written by a pasty tubercular Czech who couldn't hang clean a paper clip made us so sad at the time that we stopped watching The Fugitive for the 38th time and wept.

If one were only an Indian, instantly alert, and on a racing horse, leaning against the wind, kept on quivering jerkily over the quivering ground, until one shed one’s spurs, for there needed no spurs, threw away the reins, for there needed no reins, and hardly saw that the land before one was smoothly shorn heath when horse’s neck and head would be already gone.

That's just so full of sorrow. And racism. And sorrow. 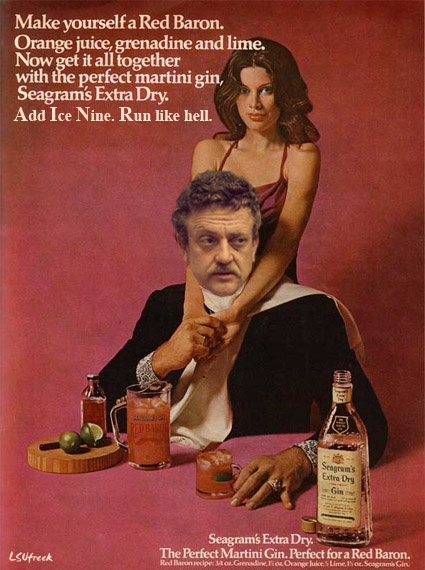 "Why flirt with extinction when Seagram's and Ice Nine will fuck it on the dash of a Lamborghini Countach and wink at the horrified onlookers?" 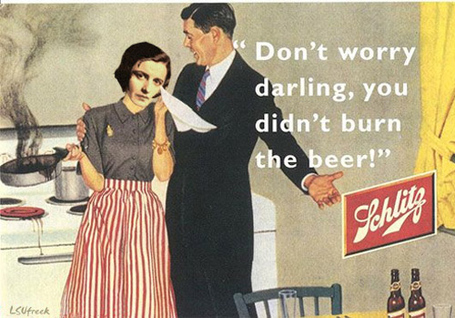 Our nation's finest children's author was not our finest cook, but if medicare's picking up the bills then you've got a few bucks left over for take out Chinese. LOOTERS DRINK BUD, and fuck Ayn Rand. 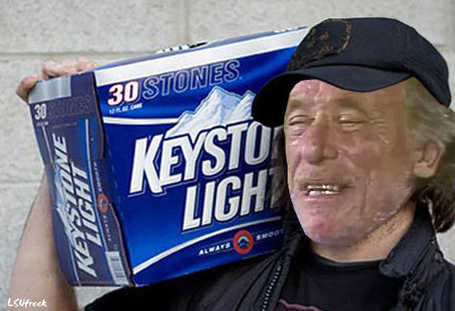 This may not be a photoshop. Bukowski is the one on this list most likely to have actually posed in this position at one point in his life in this exact posture with this exact lighting, most likely while heading down the street to have sex with a three hundred pound prostitute. Bukowski preferred liquor, sure, but don't act like he wouldn't be happy to take down a suitcase of Kuala Lampur in the parking lot. 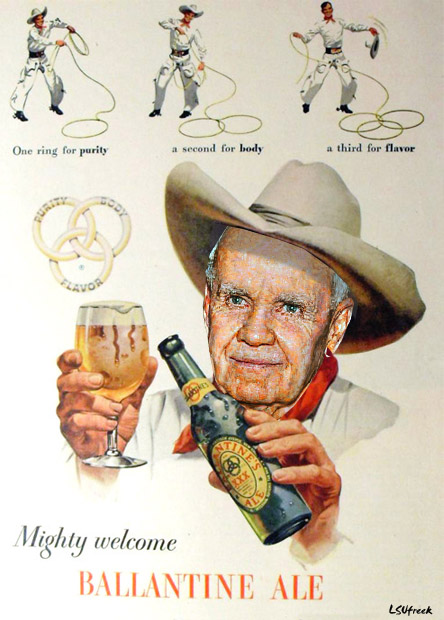 Ballantine Ale was the choice of Hemingway, but in the mortal sandstorm of history let it be shown that the dust swirls and falls and ebbs and covers the dusters of Cormac McCarthy whose throat felt the beer hit like a thousand elderly men in wheelchairs raining onto antarctic ice in a gory hailstorm of intoxicated clattering senescence. The next three posters in this series are Cormac McCarthy drinking beer while gutting a man to drink the water left in his liver, a bottle of Ballantine posed on an infant's skull in a post-nuclear wasteland, and a naked photo of Billy Bob Thornton with the word "NO" written on it, which is weird, but that's what Cormac sent the ad agency in the mail. 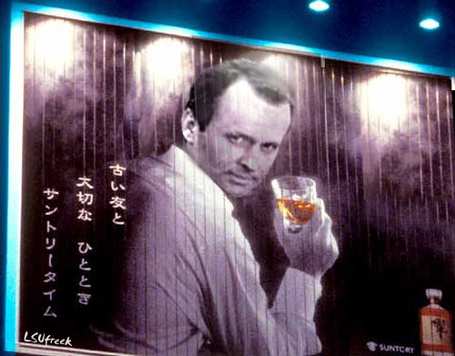 John Grisham is Suntory Time, probably in an ad featuring a lawyer strikingly similar to Grisham, who probably has lots of sex multiple times a day with stunning women, and who uses his lawyer power to out-lawyer other lawyers in LAWYERDOME. Then he gets on a sailboat with Suntory, and spends his time slapping his name on shit in Mississippi. 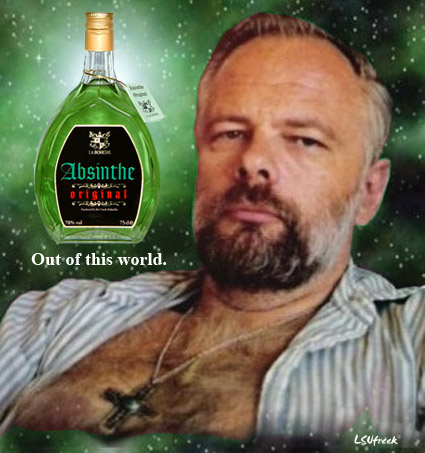 Phillip K. Dick probably didn't drink absinthe, but then again, if he did, would one ever really prove that the consumption of said absinthe was real, and perhaps done by a robot who only appeared to be human?