Share All sharing options for: POLICE STORIES OF ORLANDO

December 27, 2013. It'd been circled on the calendar for months, but to Officer Phil Crabblesworth, it meant more than any clumsy arc of a pen could signify. That date meant the closing of one chapter in his life and the beginning of a new one. It meant he'd finally be able to let go of his armor, both physical and emotional. It meant accomplishment, and pride, and a sense of a job well done. Not many who chose to join the Orlando Mounted Motor Police made it through twenty years - some found they didn't have the heart for it, some cracked under the pressure, some just drifted into desk work. But on December 27, Crabblesworth would hit his twenty, and retire with full honors.

Still, Crabblesworth was a professional. The last day was still a day in which he owed his bosses, the citizens of Orlando, his best. You didn't become a Mounted Motor Police Officer because you wanted to take the easy way out, and Crabblesworth's record proved that - the press clipping from '98 when he'd caught the Putt-Putt Arsonist. the commendation in '95 for breaking up that street racing gang of escaped Komodo dragons, the award from the department in '04 for taking a bullet for Mayor Above-Ground Pool Full Of Hpnotiq.

A tough job. A tougher man.

As he walked into the garage, several officers stopped to shake Crabblesworth's hand. "Heard the Captain left you a nice going-away present!" chuckled Dantsley. Crabblesworth looked at the assignments board and smiled. Fitting that he'd be spending his last day on the job with MMP's newest, a rookie named Terry Lisbon.

"Lisbon!" Crabblesworth barked. "You ready to learn why the Mounted's the baddest law enforcement outfit in Central Florida?"

"Born ready, sir," said Lisbon. This one was cocky. He'd need to be if he wanted to make it in this town.

Lisbon got on his motorcycle. Crabblesworth held back briefly, taking it all in. He wanted to remember this moment, just as clearly as he remembered being handed the keys for the first time in 1993. The last ride for an old lawman. 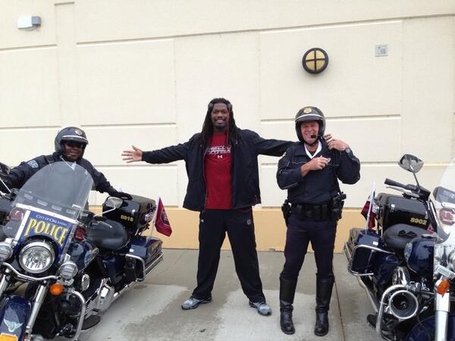 The coroner couldn't say for certain, but we like to think Crabblesworth never left that moment, even as the wild Clowney attacked him from behind.