EVERYONE'S A VIP TO SOMEONE, AKA THE ONE WHERE WE RUN OUT OF SENSE COMPLETELY

2. When my sister was born, my father went to bed at two a.m. in Columbia, South Carolina. He was watching me. I remember this because I have an abnormally long memory, and remember things from a very, very young age. This made be about two years old, sleeping soundly in some footy pajamas, probably, tucked back into bed after getting home from the hospital at two a.m. with my dad. At four a.m., two hours later, someone called the house. One of the Wendy's he supervised in Columbia had burned to the ground that night, torched by a blaze started when employees left wadded-up uniforms on top of a cranky old water heater. He had to take me in the wee hours of the morning, probably still in the footy pajamas, to survey the damage. One of my first memories of that Wendy's: charred black frame, dinging tables with the old-tymey laminate newsprint melted off the sides, water dripping everywhere, and the damp smell of an extinguished building fire in the cold of the morning. He now had two hours sleep, two kids and an incinerated restaurant. Sometimes that happens.

3. Or we can talk about my attorney, who was driving down a road near Okeechobee, Florida in your average rainstorm when a truck slid across the road towards his Cadillac CTS, which he owned because he is a very old young man. He spun, hit the brakes, slid again, did a 360, and spiked a guardrail that flipped the entire black crashbox of a car into the air. My attorney remembers distinctly the sight of the dashboard, now fully upside down and parallel with the horizon with ultra-green Florida swampgrass beneath him, lighting up with the words "TRACTION CONTROL ENGAGED" like that was going to help with the tires spinning against air, and the car set to take a Talladega endover through the Everglades. He flipped into a drainage ditch that was normally full, and totally capable of drowning someone in a giant brick of a car like his. It was dry. He lived without a scratch, because sometimes you survive the things that happen. 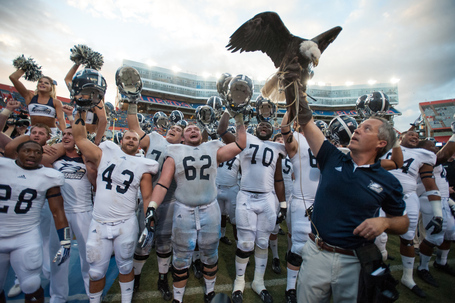 5. Or we can talk about the time when, during the wasted years between 22 and 30, I almost ate a cinder block thrown off the Livingston Avenue Overpass at one in the morning. We were driving through Tampa on our way to Key West for a vacation we could not afford. I remember going eighty-one miles per hour with the lights shining on an empty stretch of moonless, dark Florida highway when, mid-sentence in a conversation with my wife, the car seized and the windshield exploded. I drove about a quarter-mile down the road, checked the car, and continued driving to Tampa. The next morning, the insurance agent rubbed his fingers on the gray dust on the dented strut across the top of the windshield. Another inch or two, or another miles per hour slower, and the cinder block would have landed in my teeth. We had no car, and no money to fix it, and we were in Tampa. Those details in succession are redundant, but there they are. Sometimes those things happen, and you make it worse by not being ready for them.

7. Your car at one point in life will assure you that traction control is engaged while it is upside down and flying through the air, or you'll nearly get killed by a cinder block thrown by some failed anonymous murderer in the dark of a Florida night, or you'll be walking through a burned-down restaurant with a two year old in one arm and a newborn in the hospital. And to be honest, in any of those situations, there isn't a guarantee that any of that will get better. Things may suck forever, and then simply end without redemption.

9. I'd list everyone who was injured for Florida this year, but I don't want this to run long, and that list is very, very long. I could list every horrible play, and every horrible moment, but again that list is...long, so very long that it is hard to pick exactly one moment that was so much worse than others as to merit a separate note. This team was so uniformly bad, produced football of such horrendous quality so consistently, and was incapable of doing anything but playing defense that even the Georgia Southern debacle felt like simple logic. No defeat, at the end, felt like an insult. They became facts presented with little flourish, like a contractor pointing out rotted spots in the foundation of your house. You see that? It's gonna fall in, because it's shit. This is a shitty house. I don't even mean that as an insult, because that is a technical term indicating the extreme degree of shit you're living in here. Just shit, in all directions, buddy. That's the word.

11. It's probably Georgia Southern, though, but only by the thinnest of margins over almost any other moment in the season after September. I watched the final of that game and put "Rose of Cimarron" on the jukebox in a Stillwater bar and ordered a drink. I wasn't even mad. It just made sense at that point for it to happen, and for me to listen to some Poco and do a shot of Fireball.

12. You can't even be that mad, because knowns are known at this point. Will Muschamp tries hard, and is not very good at his job. This is not a matter of conjecture: by record he is not very good at being a head coach, and by recent trend is not improving. He could get better, but as a rule people do not change or learn from their mistakes. They will likely make the same ones over and over, and fail to learn from them. I've said this before, because it doesn't change. When it does, we will stop saying it.

14. That is not what you hope for anyone, but it is what you can bet on as a guiding principle. The offensive coordinator and line coach have been fired. In response, based on prior experience, Muschamp will hire someone else to fail, and in a year he will be fired. I do not want that to happen. This is probably what will happen. In a year there will be a new coach, and a new staff, and then the process of rebuilding this teetering deluxe swamp mansion of a football program will start over again.

15. It will be the continuation of a disaster you might have thought was over, and you'll just have to deal with it. Not a real disaster for you, mind you, but a disaster nonetheless. For some it'll be a dim memory, like a burned down restaurant that's probably since been converted into a popular Mexican restaurant, but still has the distinctive roofline of what was once a Wendy's. If you're lucky, it will be a dim spot obscured by subsequent happinesses. For the young, it'll be a cold, weird memory.

16. You will have to deal with it, so you might as well turn up. I got to watch the Iron Bowl with my dad this Saturday, the Alabama fan who had to babysit me and take part in an arson investigation three decades ago. Auburn ran back the field goal for the winning score. When Chris Davis crossed the goal line, he paused, said "That just sucks," and laughed. I had to laugh during the FSU/UF game. Skyler Mornhinweg was passing the football. There is no other choice when confronted with something that tragicomic.

18. You also have to appreciate those brave enough to endure it. Jon Halapio played with a torn pec for most of the season. Tyler Murphy ran for his life and played in pain before he lost all ability to throw, and had to yield to poor brave Skyler Mornhinweg, whose year can best be described as sheer, foolish valor. Solomon Patton never, ever surrendered to despair, and was maybe the only consistent player on offense the entire year. I don't know what a Trey Burton is, but he tried to Trey Burton, and that's commendable in a debacle situation.

19. I would like to try and adequately describe what happened to the overtaxed, overcommitted, and battered defense that tried to carry this team singlehandedly, but there's just tears where words should be, and blubbering where a thank you would be spoken. Accept some interpretive dance, and a gesture invented on the spot to thank you that means "The gratitude and admiration that surpasses speech, and the admiration for that which was destroyed in an act of total ruination."

20. All in all, you were a horrible team, and horrible teams are filled with brave individuals who know they're going to take a public beating every week. That bravery should be saluted. You tried, and that's more than some do.

21. In summary: there was no point to anything that happened to this team, or anything that they were told to do. It was bad, and it might not get better--not for a long, long time. You will want to say the things you say to something you love when it's bad, and it's likely going to stay that way. You rain cliches. You get back on the horse. You're my favorite horse even if you never win a race. Slow and steady wins the race. Winning is a habit, and so is losing. Something that goes back to horses. More slow progressions, and a gradual hammering to a vaguely defined excellence. Courage, or something. Apply courage and determination to the wound, and repeat.

22. You run out of cliches, and hit the cold bottom. You say the word: terrible. Everyone's terrible sometimes. You've been terrible. You've been terrible at a lot of things. You're terrible at caring. Caring is stupid. Why would you care about something stupid? The only reason is that everyone's a VIP to someone. It is either stupidity or love or something indistinguishable from either, but everyone is a VIP to someone, even when they deserve it the least. And once you decide they're important, it is either a great weakness or strength of the heart that they stay important forever whether it makes sense or not.

23. You can never decide if it does. You play the song. You let the rest burn.