Begin with the mind boggling: if Baylor's offense were scoring half of the points they average for the 2013 football season, they would still be the 49th ranked offense in the nation. If Lache Seastrunk were to give up half of his average yards per carry on a whim, he would still be averaging 4.5 yards a carry. If Bryce averaged half as much per pass attempt, he'd still be better than 25 of the top 100 starting quarterbacks in the nation.

But maybe this "Half-a-Baylor" conceit already seems stale to you? Perhaps it won't if we note that were Half-A-Baylor ranked as a team, they would still have more touchdowns on the year than Oklahoma, a team whose offense has struggled to get out of the twenties points-wise. We should note that Oklahoma has a fine defense, and that if they played Half-A-Baylor's offense they would still lose because Baylor's defense currently sits one slot behind Oklahoma's in the total defensive rankings, and just two behind them in defensive efficiency.

Half-a-Baylor is not scheduled to play tonight. Baylor is. By the numbers, Oklahoma is already halfway down a dark waterless well and slipping.

Until pretty recently, the Baylor Bear--named "Judge" if it's male, and "Joy" if it's female--was walked around campus on a leash, and regularly fed Dr. Pepper. You already win, Baylor, and that's before we remind you that Oklahoma's mascot is a post-pubescent My Little Pony character named Indian Casino Riot, and that he's never been noodling once in his life. 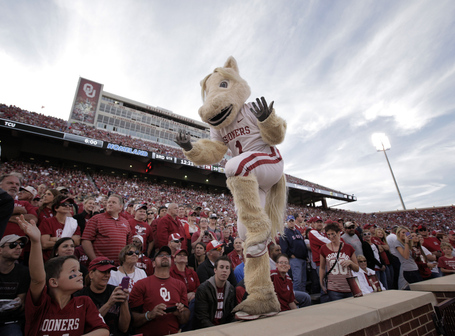 Oklahoma also has a wagon. It is noted for falling over once, and also for getting a possible championship shot revoked on a penalty.

OH FLOYD CASEY GOIN' TARPLESS. Floyd Casey hasn't been too bad a venue in recent years thanks to people a.) actually having football worth showing up for, and b.) the hope associated with Floyd Casey's impending doom thanks to the construction of a new stadium across from campus. You can be affectionate towards it now, Baylor fans, and toward the wretched tarp, much like the way people pine for shitty neighborhoods they used to live in, and would kill themselves rather than return to ever again. Ideally, Baylor's offense literally burns down the stadium in the finale against Texas, and everyone walks to the new place and decorates the pedestrian bridge across the river with the severed head of Bevo.

Before you ask: why Frank Shannon? Because there are not enough dudes named Frank anymore, and if you don't think that's a major reason why this country has fewer and fewer Detectives Who Wear Leather Jackets On Duty every year, you're kidding yourself.

Baylor could have locked this up with five worthy alliterative entries, but Oklahoma has one player sort of named after the first murderer in history and another named after yogurt. That's compelling, but they don't have anyone who shares a name with the university AND who has a last name that is a type of the team's mascot. You were born for this Factor, Baylor Black.

Given: Art Briles wanting to crush anything in front of him. Also a given: Oklahoma being in the unusual role of staring up at Baylor, and relishing the opportunity to take the longest and messiest of pees into Baylor's brimming punchbowl. The highest profile loss for Oklahoma in recent history came at the hands of Baylor in 2011. This would be a good time to watch Kendall Wright catch one of the freakiest touchdowns in recent football history. Let's all do that right now.

Ahh, bitterness. The flavor of fall.

BY A SCORE OF 4-1 BAYLOR, YOU'VE BEEN FACTOR'D. The Factors are all turnt in your direction, Baylor. May god have mercy on your furry, foraging souls.