Don't even pretend like you're paying attention to Iowa-Nebraska. You liar. At best you're watching reruns of Diagnosis: Murder. (Oh, and the updated spreadsheet for all Spike Factor participants is here.)

Lowest Spike Factor last week was split between four different players - Keenan Reynolds, B.J. Denker, Anthony Boone, and Garrett Gilbert. (Ignore the fact that Garrett Gilbert won something.) They all put up a 16.67% number, and we thank each of them for not completing one more pass or one more positive rushing attempt, thereby breaking this tie.

Heavens, that was exhilarating.

There was a five way tie for median Spike Factor in Week 13, split between UAB's Jonathan Perry, Ross Metheny of South Alabama, Kevin Hogan, North Texas QB Derek Thompson, and Kolton Browning from Louisiana-Monroe. That's far less exciting given that there's no accompanying GIF. Maybe there should have been, and if Santana's the smoothest, the most middling musical artist is...Randy Newman, perhaps? Yeah, not gonna search "Randy Newman GIF." Don't need that in my search history.

While the other Spike Factor award categories were too close to call this week, the Tetanus Spike was most certainly not. Technically, UMass's A.J. Doyle (68.42% Spike Factor), Sean Mannion, and Colorado State's Garrett Grayson (tied with a 63.64% Spike Factor) all made the medal stand. They were not actually the almost worst. They weren't even in shouting distance of worst. 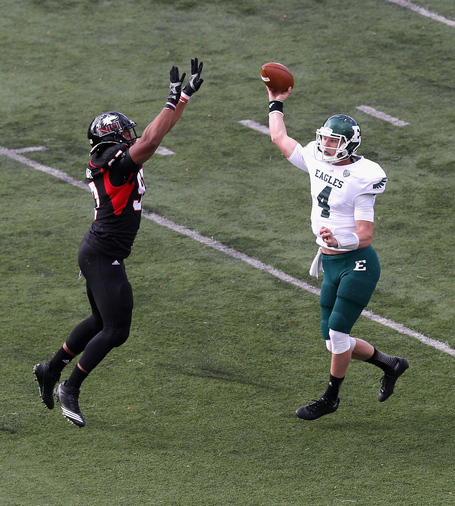 The gentleman on the right of this photo is Eastern Michigan QB Brogan Roback. We're not making that up - there is, in fact, a teenager named Brogan. Our photo tool does not have any pictures of Roback playing against Bowling Green, and that may be for reasons of good taste: he completed his first pass of the game for four yards, and then missed his next 11 while taking two sacks without any rushing attempts.

That, ladies and gentlemen, adds up to 14 plays, 13 of which gained no yardage. A Spike Factor of 92.86% is so amazing that it may never be exceeded. Props to you, Brogan. Sad, dismal, failure-filled props to you.