WARNING: THERE IS NO SANTANA GIF THIS WEEK BECAUSE REASONS.

Please note: this week's Spike Factor includes a short bit of opinion related to the Jameis Winston matter. If you're not interested in that, we understand, and you can skip straight to the spreadsheet.

Jameis Winston finished with the lowest Spike Factor last week, 14.29% against Syracuse. There is no Santana dancing GIF to follow that; his numbers were great, but talking about "Jameis Winston, football player" is a little difficult right now. There's also not much to be said about the particulars of the night in question between Winston and his accuser, unless you're interested in largely unfounded speculation. (I'm not.)

We can, however, discuss one point: the assertion that the detective on the case warned the complainant that pressing the case against Winston would make her life miserable. That warning, as some have pointed out, may not have been intended maliciously. It likely has some practical advice to it, whatever the tone in which it was delivered.

And that's the unaddressed problem. Simply defending that warning as accurate suggests the central premise - that someone who believes they've been victimized by a member of the community with status will be subject to threats, intimidation, and public shaming - is acceptable. Whether or not Winston committed a crime, that behavior discourages other victims from coming forward and filing charges. It's hard enough for victims of sexual assault to navigate the justice system successfully. We need to speak up against those who try to scare them off from even trying.

(resume discussion of quarterbacks who are bad at doing quarterbacky things)

Median performance of the week is a split between Central Michigan's Cooper Rush and UMass's A.J. Doyle with a Spike Factor of 42.31%. Coincidentally, they face off tomorrow, though it's possible Central Michigan and UMass have just played each other all season. We haven't really bothered to check.

It's amazing how numb we've become to Southern Mississippi's tumble. The losing streak's now at 22 straight, but what makes it so painful is how consistently unterrible the Golden Eagles had been - before last year, they hadn't had a losing season since 1993.

Here's how bad it is in Spike Factor terms: there are only eight quarterbacks with at least 200 plays and a Spike Factor of 50% or higher. Thanks to Nick Mullens going 29 for 43 in our metric (67.44%), two of those eight play for Southern Miss. This is euthanasia territory. 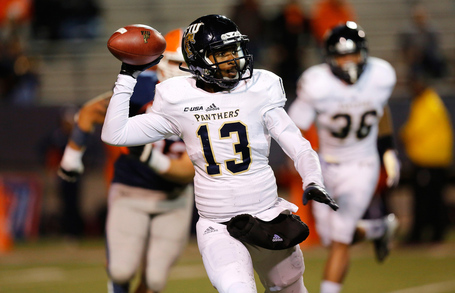 Even against lesser competition like UTEP, FIU is not a good football team. The same is true of E.J. Hilliard, who was asked to move the ball 17 times against the Miners and only managed something positive on five of those snaps, locking up the Tetanus Spike award for this week with a Spike Factor of 70.59%. Truly a Ron Turnersome performance.

Did we mention FIU's one victory this year...is over Southern Miss? OH MY GOD THIS STORY KEEPS GETTING SADDER.