The thing about gathering the data for Spike Factor is I have to go back and look at Florida box scores I have no interest in reviewing. Did you know Tyler Murphy threw the ball FORTY-SIX TIMES against Vanderbilt? Nothing makes sense anymore.

CARLOS SANTANA PLAYERS OF THE WEEK

This year, we've tried to make sure that the reoriented nature of the Spike Factor as a quarterback measure (and not a team one) does not unduly reward quarterbacks who don't actually throw the ball, and the last two weeks illustrate that fine, if arbitrary line. In Week 10, Air Force's Nate Romine finished with the lowest SF, notching a 13.33% against Army to beat out UCLA's Brett Hundley (17.14%). Romine did most of his work on the ground, but he did throw eight passes and completed seven of them, all for positive yardage, so we're willing to give him the nod for that effort.

Week 11, by comparison, was technically won by New Mexico's Cole Gautsche, with a Spike Factor of 17.39%. Gautsche, however, only threw three passes (completing one), so we've elected to deny him this award and instead give it to Hawaii's Sean Schroeder and his 17.95% Spike Factor...in a two touchdown loss to Navy. Ok, so maybe we're also doing this because otherwise Hawaii won't win anything all year.

Week 10's median goes to Logan Thomas, holder of a 39.34% Spike Factor as he guided Virginia Tech to a loss against Boston College. Did we forget about that loss? Oh, Hokies. We will never forget about that loss. And Week 11 mediocre honors are shared by Memphis QB Paxton Lynch and LSU's Zach Mettenberger, both with a Spike Factor of 41.3%. Alabama's Defense: They Make You Look Like Memphis.

Plenty of quarterbacks from unimpressive teams were in the hunt for the Tetanus Spike two weeks ago - Purdue's Danny Etling (62.16%), Wake Forest's Tanner Price (62.71%), Virginia's David Watford (64.29%). And the prize was very nearly won by Tulane signal caller Nick Montana, who finished second with a 68.18% Spike Factor but is still bowl bound so eat it, Jim Grobe.

Last week? We have nobody to name in this category for Week 11, because the winner outdistanced his closest competition by nearly ten full percentage points.

We hate to twist the knife, Northwestern fans, especially after that wound was just starting to close, but the numbers say what they say: Trevor Siemian was the quarterback most easily replaced by a Jugs machine pointed at the ground, thanks to a Spike Factor of 68.75% against Nebraska. Not 1995 Nebraska. 2013 Nebraska. Let's just move on. 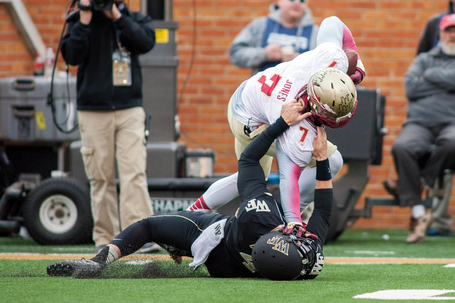 That person on the bottom, desperately grasping at FSU lineback Christian Jones like he's trying to use him to climb out of a pit of quicksand? That's Wake Forest quarterback Tyler Cameron, who was forced to step in and play after Tanner Price turned four passing attempts into one completion and three interceptions. Cameron was responsible for gaining yards on 22 plays against the Seminoles and only succeeded six times - a failure rate of 72.73%, easily making him the Tetanus Spike winner for Week 11. We know this should have gone to Price, Mr. Cameron. We know.