There's a trend developing as we work through the second half of the season, and I hope you're sitting down, because it's groundbreaking: shitty quarterbacks keep being shitty. We'll get to that in more detail (and, if you really can't be that patient, all the results for Week 9 are right here), but let's start with LOS REYES MAS SUAVE!

Several well-known QBs gave a good run at this award in Week 9; Teddy Bridgewater blasted USF to pieces with a Spike Factor of 20.59%, Jordan Lynch beat up on the Ron English Parapoopers and put up a Spike Factor of 15.79%, and in between them sat...Michigan State's Connor Cook (16.67%)? Damn, Illinois, you strugglin'.

Smooth? Very. Smooth enough to win? Unfortunately, no. That distinction belongs to the Mambo King of Orlando - Blake Bortles, who picked up yards on 22 of his 26 plays for a Spike Factor of 15.38%.

GIVE BORTLES YOUR HEART, AMERICA.

Spike Factor's weekly median keeps hovering right around 40%, and this week the bearer of that middling weight is Kent State's Colin Reardon (40.48%). Mostly we keep reporting this number in the hopes that one week it will be crazy high or crazy low, so we can all go "hey remember that week where nobody in the Big Ten completed a pass?"

As we were saying before, the same names keep popping up in contention for the weekly Tetanus Spike; for example, both UConn's Tim Boyle (66.67% against UCF) and USF's Steven Bench (69.23%) were close contenders for the award. Bench isn't two-time winner Bobby Eveld, but maybe he is, because nothing makes sense in Tampa. And Boyle's yet to win a week but currently has the highest Spike Factor on the season of any quarterback who's logged at least 100 plays - 60.48%.

Oh, and there's another repeat offender taking home this week's... 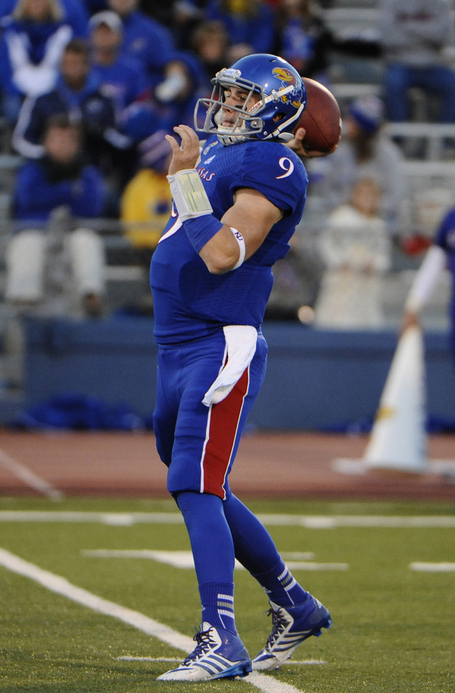 Good lord, Jake Heaps, you look like the most awkward Starting Lineup figurine ever. This is back-to-back shampionship weeks for the Kansas quarterback, who attempted to gain ground 21 times and only succeeded on six of them, a glorious Spike Factor of 71.43%.

Of note! Heaps was terrible in this game and lost, but his opponent was not much better. Case McCoy finished fifth in the Spike Factor this week, picking up no positive yardage on 12 of his 19 plays (63.16%). That means, if you watched this entire weather-delayed monstrosity, you saw two quarterbacks combine for thirteen plays that weren't utter failures. Thirteen. In the whole game. You're such an idiot, Bob Stoops. (so sleepy. screw you washington state.)

And that was against Baylor. Laugh at Greg Robinson if you like, but Texas has looked improved-ish on defense, so there's a real chance Heaps could get the trifecta this week, in which case there has to be some sort of clause where Charlie Weis has to refund all the money Kansas has paid him, right? Right? No? Fucking lawyers.