THE VOLS HAVE GOTTEN DOWN WITH THE SICKNESS

Share All sharing options for: OUTBREAK! THE TENNESSEE INJURY CURSE IS WEAPONIZED

There is an epidemiology to curses. For instance, Tennessee's perpetual issue with injuries during the Dooley era-- primarily one of linebackers suffering outrageous knee injuries for no apparent reason-- did not appear to be communicable, and showed no signs of spreading to other teams. In fact, playing Tennessee was good for you, contained necessary vitamins and seemed to cure ailments like losing.

Be advised: that may have changed. Butch Jones' greatest accomplishment as Vols' head coach may have come in fully weaponizing the curse of the Tennessee linebacker for use in play in conference games. Florida lost Jeff Driskel to injury against the Vols. This past weekend, the Georgia Bulldogs lost not one, but two key players to injury: running back Keith Marshall and receiver Justin Wesley-Scott, both to ACLs.

Laugh if you will, but project the numbers out and it'll all make sense. 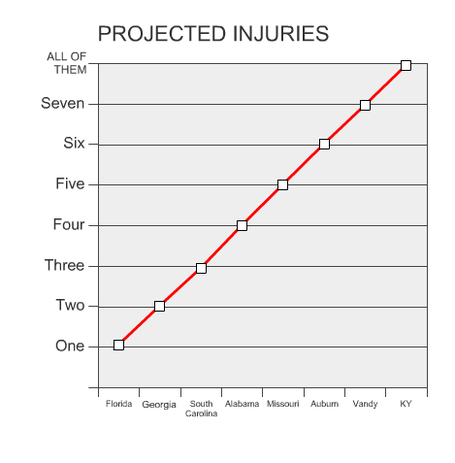 What makes sense about it? Mostly that if the Tennessee Indian Mound Ancestral Injury Curse continues to be loosed upon the SEC in this fashion, the ones who will pay for it most will be the Kentucky Wildcats. (Because remember: whatever happens in SEC football, it eventually lands with a thud on Kentucky's head eventually.) How will this injure Rich Brooks, Naomi Judd, Jared Lorenzen, and three recruits in the 2015 class? DON'T ASK QUESTIONS YOU DON'T WANT ANSWERED, SON.