EVERYONE IS ON FIRE IN AMES ALL THE TIME

IN AMES, IOWA EVERYONE GETS BURNED ON THURSDAY NIGHT.

You know it's a quality game when the winning team runs into the arms of T.S. Eliot for solace, the losing team feels pretty good about everything but a horrendous cheap shot against one of their players, the wronged coach can barely utter more than a word or two at a time due to a rage-flood, and almost everyone leaves stunned, and unready to play another Thursday night game in Ames for a year or two. Seriously: AMES IS FLAMES, and all who enter Jack Trice Stadium after dark should rememeber this. (Especially perpetually burned Iowa State fans.)

SUNRISE, SUNSET. Bravo to UCLA for surviving a 34-27 nailbiter against a Utah team that had five interceptions and was still in a position to win the game at the end of the fourth quarter. (At least four of those weren't his fault.) The last one sort of was, though, and that's how you end up with the Full Henig in a noble defeat. Oh, and boooooo to the injury genie for granting UCLA's starting right tackle Torian White his completely unwanted wish of a broken ankle.

DAWWWWWW. Bishop Sankey's grandfather just regained his sight after a cornea transplant a few weeks ago, and will watch his grandson play college football for the first time this weekend. He also wants to play fullback, because he has not seen how big college football players really are for five years. As for how he originally lost the sight in his left eye:

He’s not entirely sure how it happened.

Yes, he does live in Alabama! Why do you ask?

DOOOOOOOON'T READ THOSE COMMENTS. A Yahoo! article about how Hugh Freeze needs to suspend players for heckling a play about a murdered gay guy has 1703 comments at 10:30 a.m ET, and all of them will poison your brain and make you die. 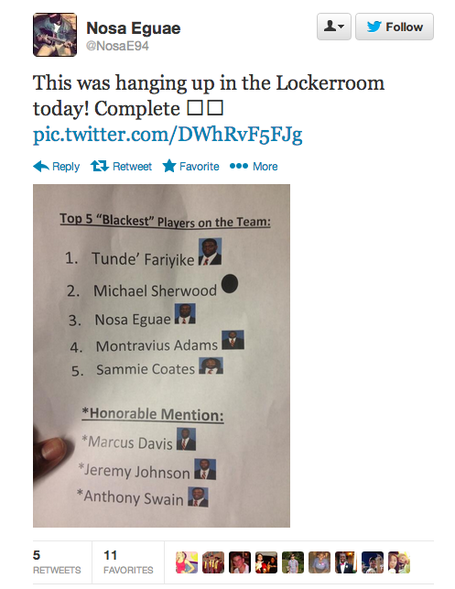 This tweet has since been deleted, which always works because no one ever screencaps things or searches the wayback machine. GUS MALZAHN WAS ROBBED.

ETC: Someday we'll be chill enough to ride with a squirrel like DL3. The 90s were truly a golden age of basketball. Fierce rhymes only get fiercer when you're sitting on a Vespa.