Here's a fun split: Arizona State, while claiming the number six scoring offense in the nation, averages twenty points less on the road than they do at home. (51 ppg on the road, and 31 at home.) This happens for a lot of reasons, the largest being that Arizona State has faced all of their mediocre opponents at home--Sacramento State, Colorado, and USC--while going on the road for both losses at Notre Dame and Stanford. Remember when we said that everything Arizona State did felt like the flimsy drywall and just-above-generic fixtures added by dodgy house-flippers to ensure sale to gullible morons? TODD GRAHAM WILL STILL FLIP THIS HOUSE. He has planted a Japanese Maple on the fifty; audibles are triggered by the call sign "CURB APPEAL."

Meanwhile, Washington State has no options. This house now has a roof, making it only the third-from-worst house on the block, inhabited by an odd, spectral-looking man constantly muttering about Geromino and the proper way to take a lady out on the town at the bargain steakhouse price point. Old Man Leach ain't a favorite on the street, but putting a roof on the old Wulff lean-to and sprucing it up a bit does make the neighbors tolerate you a bit more than they would.

Connor Halliday has thrown 18 TDs and 17 INTs, and by the end of the year could be the first member of the 30/30 club in recent memory. That is not a baseball reference: throwing 30 INTs and 30 TDs should get its own documentary. What if we told you the same quarterback who threw three interceptions in five minutes against Oregon State...was also the one who also threw three interceptions in THREE minutes against Utah? You'd believe that? Well, no one said this wouldn't be a shitty documentary. Halliday Road: One Quarterback's Weird Vacation From Sane Football.

On the other hand, Cirrhosis the Cougar cannot drive without blowing into a breathalyzer on his Segway, is a shell of his former self, and is often so drunk students must pull the bottle of fireball out of his hands, and forcibly carry him home. 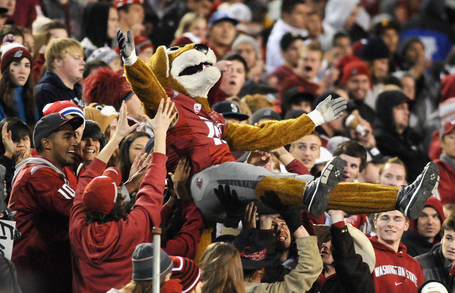 He's there every game, though, so he's got reasons to drink, just like everyone else who's watched the past decade of Washington State football. And that kind of commitment deserves something in return besides, yanno, Wazzu football.

We know that there really is no home advantage for Washington State in the numerical sense. But for psychological terror, consider this: in their spanking new stadium, it will be 40 degrees with a bone-chilling 93 percent humidity, and it will be Halloween, and it will be all of this and Mike Leach calling 90 passes dressed as a Pirate, or possibly as Todd Graham complete with dork-ass Joel Osteen mini-headset. Mike Leach, just staring across the field at Graham and wondering out loud: Er, ah, What's he doin' over there, telemarketin'? Funny story about telemarketin', it's actually something the Shoshone would do with deer urine and raccoon skins, just leaving messages at various lodges all over their territory see, it's--

Arizona State's set reads like a team of ruthless land grabbers, riding into the tiny settlement of Pullman with their top hats and pocket watches and satchels full of gold for those willing to give up their property the easy way. For those who won't sell? The business end of a custom-made, ivory-handled Cooper Pocket Revolver.

Opposing them? Charleston, Destiny, Paris, Feddie, and Tana - five bold frontier women who own and operate Pullman's most successful brothel. They built the Pirate's Cove out of nothing, and they're not about to be pushed out. These beauties usually deal in love. Tonight? They're trading in blood instead.

So who do you side with? The well-heeled gentlemen, representing the spread of industry to the lawless countryside? Or the hardscrabble black widows, out to protect the living they've scratched out for themselves?

SUMMARY: WASHINGTON STATE, 4-1. A blowout for Washington State!!! Which in no way reflects the real live disparity between Arizona State, which is sort of good, and Wazzu, which just two years ago started a dead salmon at left tackle. Dead Salmon was a gritty player, but what he lacked in talent he made up for in drawing bears to the practice field, where they ate all those players Mike Leach wanted to cut anyway.