This Saturday the Jaguars Gators face the Bulldogs in DUUUUUVALLLLLLLLLL. Big Cat Country EDSBS has everything you need to know about the game, the venue, and what Paul Pasqualoni has been up to since leaving UConn.

Share All sharing options for: Bulldogs vs. Gators: THE EDSBS PREVIEW EXTRAVAGANZA 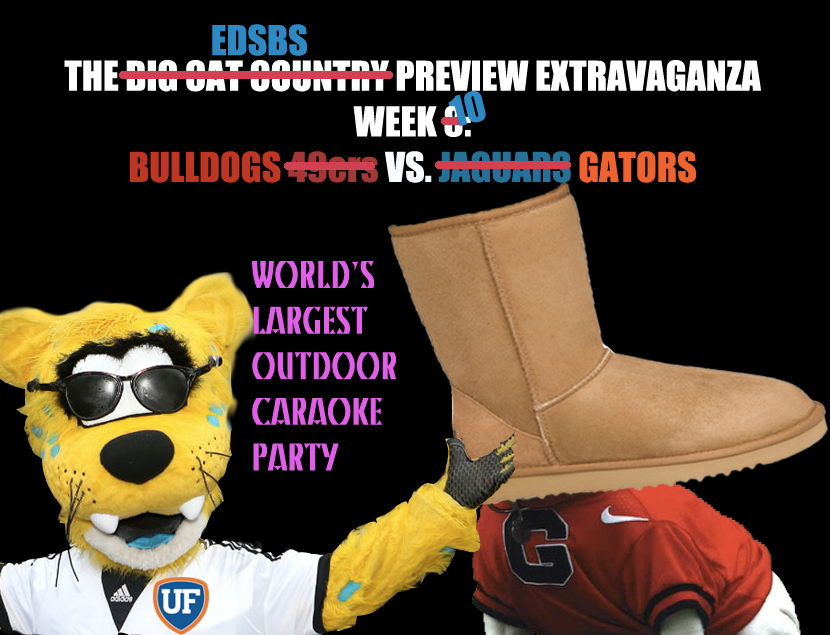 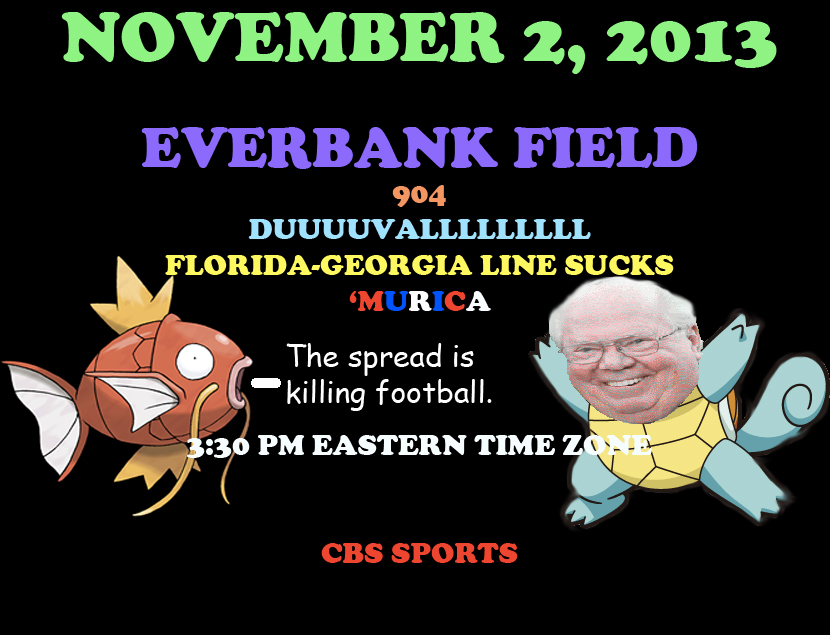 Another week, another huge battle at Everbank to decide the playoffs or the national championship. Everbank Field has produced some of the greatest moments in professional sports over the past two seasons. Usually home to the defending AFC champion Jaguars, Everbank and the local fans are no strangers to shoot outs. There has always been much tension between the Jaguars and the Florida School of Gators since Steven Spurrier left the school to coach the Jaguars in 1995. Steven coached hometown hero Tim Tebow and the Jaguars to the AFC Championship in 1996 before Tim started his epic high school and college football domination run of the late 2000s. Impressive doesn't even begin to describe it.

The legend of Tebow began to grow around the greater Florida area at a practice with the Jaguars when he was a mere 7 years old. His father, a known potty mouth, was on the sideline discussing the best way to fry fish. When Emmitt Smith told him that he preferred a mustard base to his crust, Anthony Tebow, Tim's Dad, went high and to the right. He was heard screaming "Dad NaBit!" and "Gee Lolly Golly!" Young Timothy Theodore left the huddle, partly to hide the fact that he had forgotten the play and the other part was to wash his dad's mouth out. Chewing on soap. The whole deal. Travesty. We learned from it and now you have.

Meanwhile in Georgia, a state to the direct west of Virginia, an absolutely adorable dog by the name of Ugg roams the sidelines that have been overgrown with shrubs. Georgia is in the midst of a fiscal crisis at the school and no longer afford the maintenance that beautiful shubbery requires. In some cultures, like the ones in Athens, allowing shrubs to over grow is akin to letting your kin die. After firing Lane Kiffin, a decision that cost the school 300 million dollars, the school is currently searching for a head coach and radio personality to harvest the monetary bounty that is ready for harvest. Lane Kiffin will be still be at the stadium this weekend in order to participate in the half-time contest. Lane's return will highlight this Homecoming weekend for UGA. Gators Quarterback Blaine Gabbert, who had one year of eligibility after transferring from Mizzu to the Jaguars and now to Florida ala Russell Wilson, and Lane Kiffin will be in a hair braiding contest with Lane's former father Monte as the judge. Monte is a ballin ass name.

The Jaguars are looking forward to suiting up in their throwback Gator uniforms and look forward to the tune up against UGA before they take on Alabama, should the Jaguars become bowl eligible. My biggest concern about the match up is the physicality of the game. How will jet lag come into play for the Gators who are returning from a home game in London? How will Georgia overcome the embarrassment that was the Carter administration? We will find out saturday at 845PM. 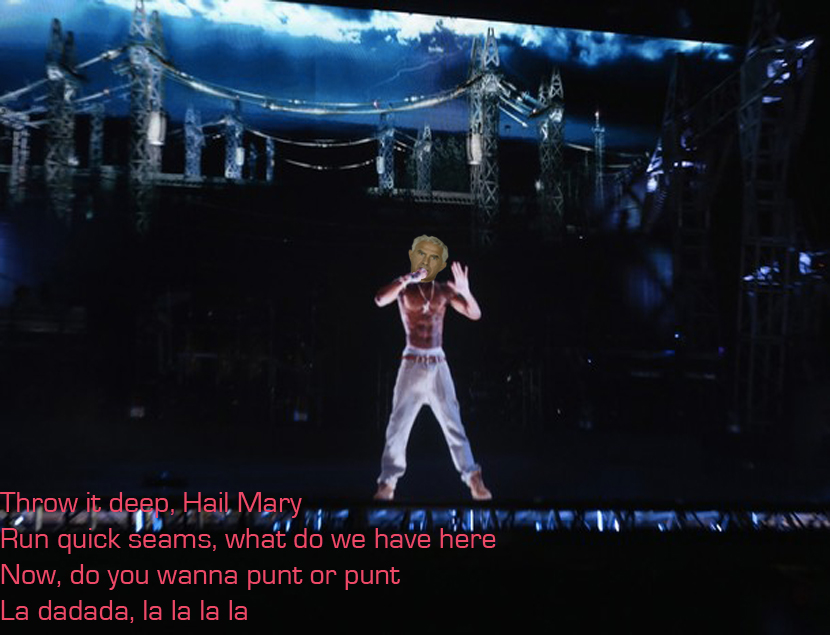 Players Only Love You When You're Playing

You might have heard of Ni(cks/x)('/'s) fellow musician Lindsey (Lindsay?) Buckingham, as made famous by that one SNL sketch your friend loves but you probably won't ever get around to watching the video. I am that friend. I am sending you the links. Watch them. I don't care if you like Kel Mitchell better, Keenan Thompson is funny. Get over it. Good Burger was decades ago. Why can't you see that? Buckingham was also part of Fleetwood Mac.

Ni(cks/x) joined Linds(e/a)y Buckingham in the recording studio for the first time in [INPUT NUMBER] years. Ni(cks/x), lamenting over her (and your) favorite SEC East team, wrote a ballad alongside Buckingham. Here is their song... 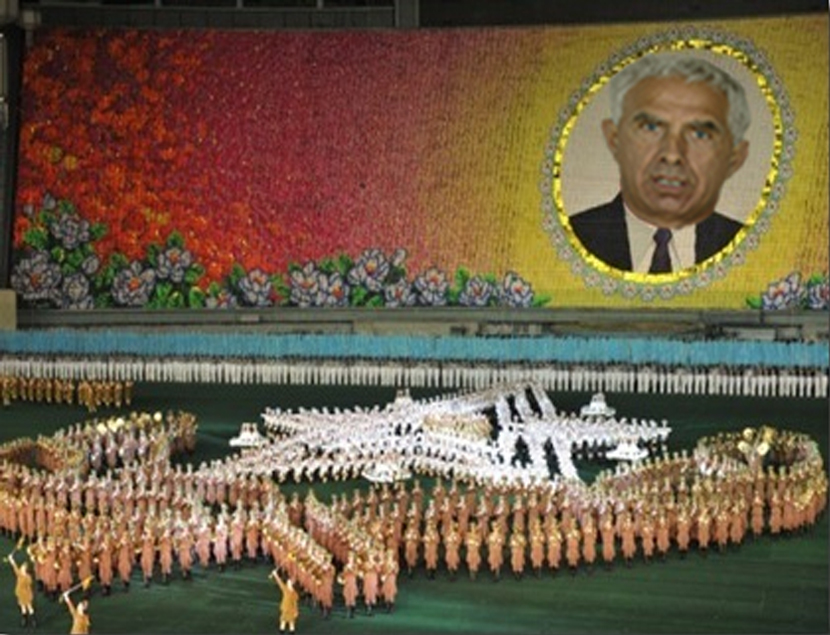 I'VE SEEN THINGS DIE AND BEEN THE THING THAT DIES

I got too drunk one night. Too drunk for the night, too drunk for 27, too drunk for earth, but not too drunk for Ponce. You were never too drunk for Ponce. I left MJQ with a friend. A block of staggering later that friend disappeared into the fog of a bender. When alcohol was at its best you were a bush pilot flying blind through the Alaskan mountains. Hit a mountain and die; come within a dick hair of colliding with the mountain, though, and every object in the universe took on a special glow. Police lights flared at the Murder Kroger. I walked downhill past the Home Depot, past Eats, and up the hill, passing the man with T-Rex hands attached at weird angles at his wrist begging for change. I took a cutoff road back into my neighborhood, a neighborhood where nice people with good jobs had houses, and lives, and clean furnishings. Somehow I got lost in the space of a block and wound up in a thicket of bamboo in the night with the branches waving over head like the bristles of a great kind dog's coat I was passing out on, indifferent to the world, or the gravel, or the cold. I thought about the time my mother tried to save a box turtle crossing the road in Tennessee. She lunged, then darted back to the side of the road to avoid an onrushing truck that obliterated the turtle. Its guts blew out from between deep cracks in its fractured shell. It flipped in midair and landed like a ruined cake at our feet. Sometimes in life you see the box turtles and sometimes you don't. You just pray that you become insensate before you realize what you see, or what you have become, or what you think dozing off in what turned out to be someone's backyard on what you wanted to be the last night of a wasted life. Florida plays Georgia in Jacksonville at 3:30 p.m. on CBS. Ruin is just another synonym for existence, and the name of the Great Pyrenees who woke me up the next morning at five-thirty in the morning was Ulysses. His huge white face: the sun on a planet without warmth, life, or concern. 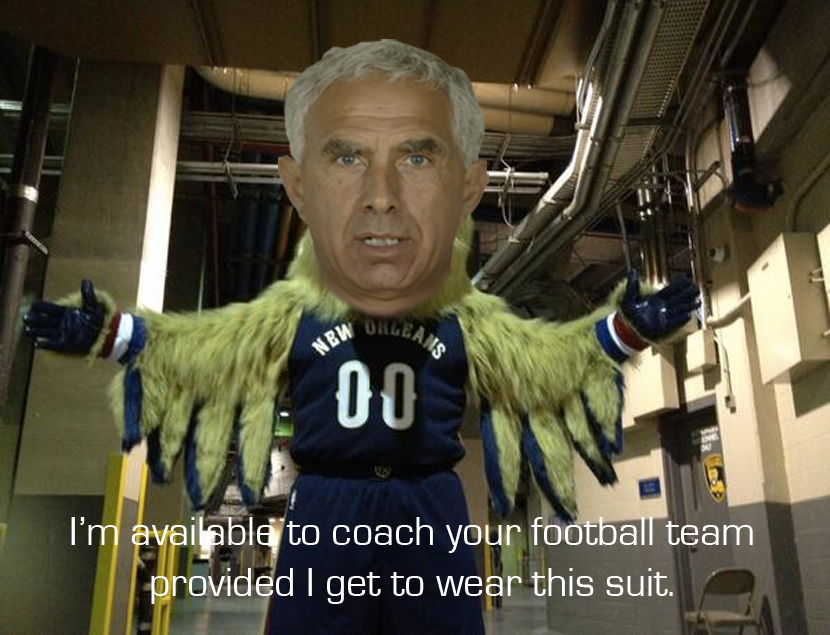 Jacksonville is the city of dreams.

While most cities boast that they are places where dreams are realized, Jacksonville prides itself as a destroyer of dreams. Verily, a team shall leave Everbank Field with it's dreams crushed. Florida no longer is capable of REM sleep due to physical and mental trauma, so that leaves Georgia by default.

The John Doe of the SEC East, Florida is a team struggling to find its identity.

Florida once had a punter. Don't know where he ran off to. I hope he has a blanket.

Georgia. A state so beautiful that a blind man wrote a song about it. Stevie Wonder has never been to Georgia, ironically.

Aaron Jay Zach Mettenberger McCarron Murray IV is the belle of the bayou to most draftniks' eyes. He's every young team's dream. He has it all: No mobility, a statuesque presence in the pocket, an inability to read the alphabet at times, and a mortar for an arm. The problem in this matchup is that Georgia's WRs are all MIA. Hopefully Coach Richt can coach up Overturned Trash Can, Red Solo Cup, Tattered Sorority Mixer Coozie, and Useless Camouflage Croakies as viable targets for Murray against an equally decrepit and calcium-deficient Gator defense.