WELL HIS NAME AIN'T DEWIN DODDS NOW IS IT

Claiming the Longhorn Network is just Burnt Orange Pravda would be inaccurate. The statistical profile for Texas is the real mother of all lies, and can prove whatever you like about the maligned Longhorns. They're scoring 32.8 points a game! (A huge chunk of that came in a 56 point effort against New Mexico State.) They're currently at 111th in defense nationally, so booooo! (That came against four offenses averaging out to 68th nationally, so...okay, you can boo that.)

Their overall F/+ ranking puts them squarely in Auburn/Cincinnati/Kansas State territory in terms of total performance, and not far off from Iowa State in terms of total efficiency. Perhaps the one thing stats cannot prove about Texas at this point is that they are anything but mediocre on the whole, and have a ceiling of "Sort of good." So, in translation for you, nerd: JUST LIKE I SAID, FARRRRRR MAAAAAACK BROWWWWWNNNN.

Iowa State are currently 94th in the nation in rushing offense, so....

The longer you look at Iowa State's Cy the Cardinal, the more horror radiates from those livid blue eyeballs. 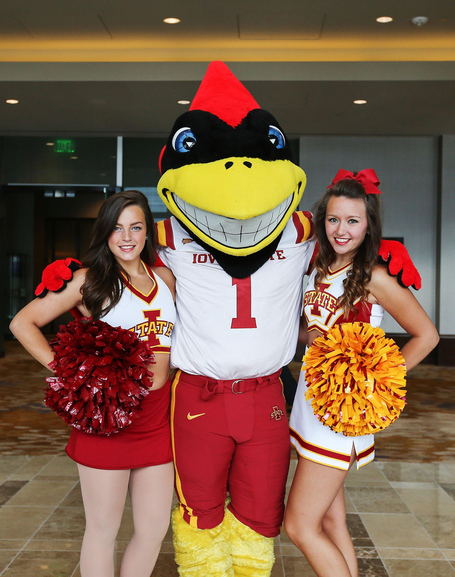 If you focus your eyes on him for more than ten seconds, his head starts to levitate up the page. Go 20 seconds, and he sort of starts to vibrate. If you go 30 seconds, we don't know what happens, but it probably involves bleeding from the eyeballs, full-body cramping, and a strange voice uttering Babylonian coming from your throat. Cy may also have metal teeth like a Mossad assassin, most likely because he is a Mossad assassin.

In contrast, Texas' live mascot-- not the plush, and largely unnecessary Hook 'Em -- is a swaggering, tranquilized wall of prime beef begging for worship and shitting wherever it wants despite contributing very little to the situation. For the hundredth year in a row: just like Texas football, and not without historical comparison. 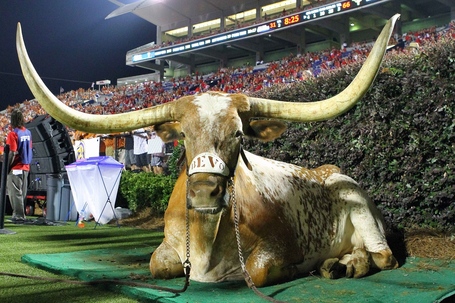 ADVANTAGE: Texas, in a landslide. 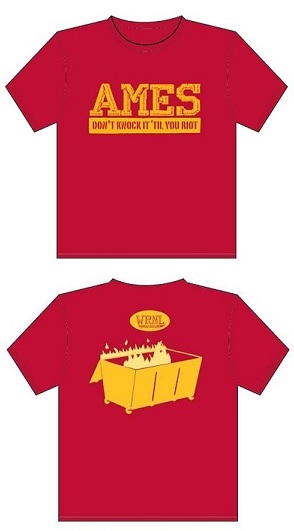 Think of Ames as your Lubbock-on-the-Great-Plains: smallish, and capable of being very loud and very mean exactly once every other year or so. Also, there are no foxes living in Jack Trice Stadium as far as we know, but we can hope because more live sporting events need incursions by uncooperative wildlife like that fox and/or Iowa State coach Paul Rhoads. Remember how Texas likes to stumble drunkenly into the old Big 12 North and drop a game they absolutely should not lose about once a year? He's not Ron Prince, but he'll do, Texas. (Especially if he brings the massive tugboat captain's beard with him.)

Sorry, but we can't even talk about the Texas names when you look at the Iowa State selection. Those look like auto-generated player names from an NCAA game programmed by a Swedish dog. Hunter DeGroot is the only one who can even compete with these absurdities. Tanner Tusha sounds like a Full House-themed booty bass rapper.

Oh, and that's not a typo. That's Chanse. With an S. How the hell are you supposed to prepare for an opponent when you're too busy wondering who came up with Chanse? Next thing you know - boom. Touchdown, Tanner Tusha.

Iowa State's only got one win in this series, back in 2010. You know, the year they lost to UCLA, finished 5-7, and accepted Greg Davis' resignation. Oh, and that wasn't good UCLA either. That was Neuheisel UCLA. But the Longhorns have pummeled the Cyclones the last two years, winning both games by 20+ points.

On the other hand, this can't be Iowa State's annual "we beat a ranked team because we like pulling the fire alarm in the middle of the SAT" game, as that would require Texas to be ranked. Texas isn't even getting votes. How can Paul Rhoads even get his dander up over this game? Here's how:

Mack Brown makes three times as much a year, before bonuses, as Paul Rhoads.

IOWA STATE, YOU'VE BEEN FACTOR'D! That adds up to a narrow 3-2 victory for Iowa State, so go ahead and put a down payment on that houseboat you've had your eye on. Paul Rhoads is gonna get you the rest, and then it's just you, a mini-freezer full of fruit for smoothies, and the S.S. SO PROUD living it up in Key West.