IT'S A BAD YEAR TO BE A RUDDY, BURLY MAN OF AUTHORITY

Share All sharing options for: ROB FORD OR BRET BIELEMA

Maybe it's because they're both a brilliant shade of flushed red, or because they're both having a challenging 2013, or because we think they could switch jobs with little effect on either's performance at this point in their respective seasons. We don't know exactly why, but Toronto Mayor and all-around nightlife decathlete Rob Ford and Arkansas coach Bret Bielema have a lot in common, so much so that it's hard to tell the two apart if you're not looking right at them.

Let's clarify the differences between the two.

Smoked crack on camera with a drug dealer: that's Rob Ford. We think.

Stuffed you in a locker in high school: Bielema, but only if you are Indiana football.

Has their own video game: Both. See here, and below, in the form of "The Thrasher."

Will beat Nick Saban in their lifetime: Ford, but only during an unfortunate fugue state at a charity golf tournament, and only while screaming "GNOMES DON'T TELL SECRETS" at the terrified coach. He'll do it with a pitching wedge.

Only capable of beating wretched Southern Miss by 21 points: Bielema, but Ford would be favored by at least 17.

Has brought in an assistant coach with a history of violent crime: Rob Ford. (Bielema knows dudes with a record might be informants.)

Has a haunted office: both, if you count Frank Broyles, who lives in a well-appointed drawer in Bielema's office.

Has a snake: Rob Ford. (Bret Bielema's talking about his dick when he mentions any snake so it really shouldn't count.)

That could be either of them, if we're being honest. 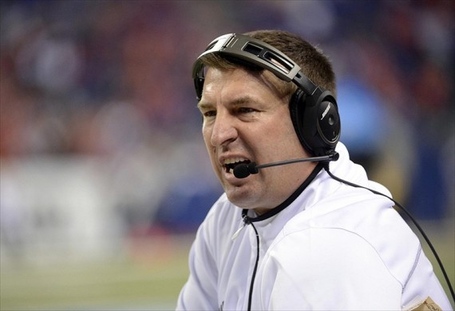 Has a crescent wrench lodged in his small intestine: Rob Ford, but only because Bret Bielema can pass anything.

Has stolen a Cessna from a poorly guarded regional airport after a night of drunken revelry: neither, since it's not stealing if you leave the keys in the ignition.

Has arm wrestled Hulk Hogan: both.

Has arm wrestled Hulk Hogan, but totally scratched their ass just before so they'd get revenge for getting dominated: both