THIS WEEK, THE SPIKE FACTOR EXAMI(SACKED BY MISSOURI)

All of the stats for week 8? Here.

A picture of Oliver Platt riding a bike? Here.

You need anything else? No, you don't. Learn to live with the essentials. SPIKE FACTOR AHOY.

We've previously expressed our unwillingness to give this award to quarterbacks who don't actually throw the ball, and Vad Lee's 3/3 passing performance against Syracuse certainly falls into that category. That said, the Orange got absolutely stomped by the Georgia Tech Wrecking Ball, and yes now you are having a very weird image of a nude-but-covered Paul Johnson straddling a chain. Lee's 11.76% Spike Factor was the lowest of the week, so we'll let him share this Santana GIF with the runner up, Boise State's Grant Hedrick, who was only prevented from gaining yardage on 5 of his 29 plays.

Last week's median Spike was 40% on the nose, achieved by Ragin' Cajun Terrance Broadway in a win over Western Kentucky and Blake Bell in a Sooners victory over Kansas. Blake Bell is the best thing that ever happened to the legacy of Landry Jones.

Have you ever wondered why ancient cultures worshipped particular animals or trees or something else that seems particularly odd to us with the benefit of hindsight? That's what the future will say about those few weeks where Tyler Murphy was Florida's anointed savior, a title he firmly lost after being stopped or losing yards on 23 of his 37 plays (62.16%) against Missouri. The good news is that he wasn't even the worst quarterback in the conference last week, thanks to Brandon Allen's 68.97% Spike Factor. At least try to gum up some of the gears in the Nick Saban Misery Processor before you die, man. 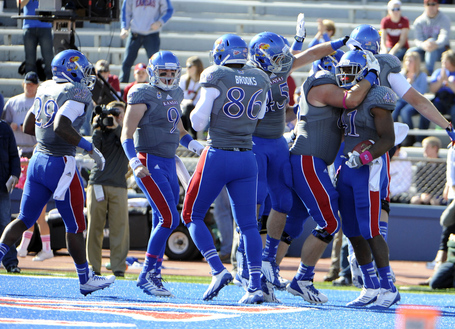 Look how happy you are there, Jake Heaps. You struck first against Oklahoma, and that must have felt glorious. Buoyed by a steadily productive running game, you went 2/2 on your first drive and your touchdown pass - yes, yours! - put Kansas up 7-0. The defense held, you got the ball back, and, though you didn't score, a key third down conversion you threw kept field position in favor of the Jayhawks, which mattered once Oklahoma fumbled the ball away and allowed your team to go up by thirteen.

Then the darkness came, and this is what you did for the rest of the game, nearly three entire quarters: seven passing attempts, one completion for negative two yards, and two sacks.

Remember the warm times, Jake Heaps. Remember the lead you held and that moment, fleeting though it was, when you were not the worst quarterback of Week 8.