YOU CAN'T POISON A ROCK SO STOP TRYING, ALABAMA 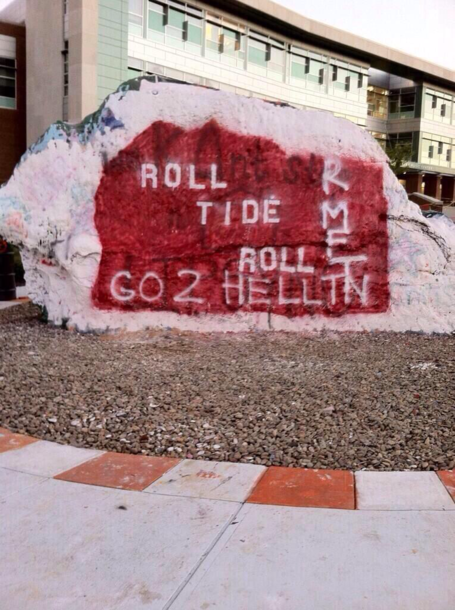 This has allegedly been countered already, albeit in a fashion which is less art, and more desperate ransom note. (Via R/CFB)

HE WAS RUN OFF THE TEAM ON A RAIL. Former Oregon TE Colt Lyerla--who after a sterling 2012 season was largely invisible for the Ducks in 2013 before declaring for the draft and leaving the team--was arrested early this morning for allegedly snorting cocaine in his car. Never snort cocaine, but if you do a.) do not do it in your car at night, and b.) if you do it off someone's buttocks, make sure they have a flat ass for minimum product loss.

STAY THE WHOLE GAME OR NICK SABAN WILL GLOWER AT YOU. Getting a bit casual, Alabama? Because Nick Saban will medical redshirt all of you if he has to.

GROUNDBREAKING TECHNOLOGY. Kentucky will be wearing team logo thigh pads against Mississippi State tonight, paving the way for the ultimate in imprinted undergear: custom protective cups emblazoned with mascot faces. In other news: Kentucky has a 12 game SEC losing streak, and Mississippi State cannot lose this game or their football team will literally explode and kill everyone in a ten mile radius, because it is Kentucky. DON'T LOSE THIS GAME, DAN MULLEN. EAT PASTE. DRIVE WITH THE PARKING BRAKE ON. BUT DON'T LOSE THIS GAME.

BRAZILLLLLLLLL. LSU's Jeryl Brazil does not need to be calmed down, woman, which is why he punched a hole in a wall and threw you across a room.

PEAHEAD WAS A STUNNA. The random fact that Jim Grobe is about to pass Douglas "Peahead" Walker as the all-time winningest coach in Wake Forest history made Celebrity Hot Tub look up Mr. Walker. Mr. Walker was a PIMP.

ETC: Why thank you for that heartfelt gunslinger's birthday wish, Brett. SAIIIIIIIILLLL.