NOT DIGGIN' THIS SCENE AND FEELING DAMN UNPRETTY

1. See, the TLC movie got it totally wrong. TOTALLY. I know it's easier to make Left Eye the crazy one because she was visibly and demonstrably insane. Burning down Andre Rison's house will do that, but then posing on the cover of Vibe in fireman's gear? That's a contract you sign, coming into legal ownership of that status of "bolt-eating crazy" for life. 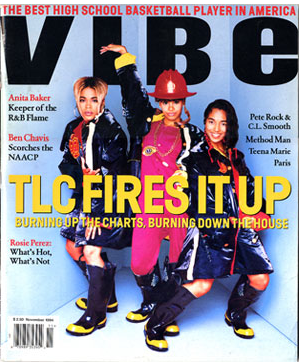 2. Florida had 151 yards of total offense on Saturday against the 50th ranked defense in the nation.

3. That moment, by the way? The instant Andre Rison had to speed down the interstate on his motorcycle, with everything he owned on fire? That instant is a high-water mark in Atlanta history, a true rubicon moment for the city. Not only had Atlanta become the inarguable cultural capital of the south, but it had grown to a point where random celebrity fireflies attracted to its warmth could commit grandiose acts of impulsive destruction as part of their job. Additionally, it marked a turning point in Atlanta race relations: not only did white people have to become comfortable referring to someone as "Left Eye" without blinking, they had no choice but to be genuinely interested in how (in the gigantic bathtub, either with some cardboard or some shoes) and why (per Andre, because she was drunk, and he wanted to slap some sense into her. No one has ever slapped any sense into anyone, but Andre is from Flint, Michigan, a place so hard even people from the worst stretches of Atlanta had to stand in awe of him even existing.) Your mom owned and loved "Waterfalls" not just because of the positive, mom-type message, but because she and TLC had been through things together. Left Eye had committed a grand act of arson for love, and one time your mom totally dropped the Christmas Tree on your dad on purpose and let him writhe there for a bit because he left his dirty clothes on the bathroom floor. They're basically like the same thing, according to Mom.

4. At 4-3, the Gators are now just hoping to become bowl eligible, and have little hope of accomplishing anything of significance this year. The offense is among the nation's worst because of injury and design. There is little reason to think Brent Pease is good at his job, and less to think Will Muschamp will fire him. Nothing will change. Abandon hope. Take every properly snapped punt as a blessing, and every field goal as a touchdown. We are Pitt for the rest of the 2013 calendar year.

5. The record should show that Left Eye had no defense attorney in CrazySexyCool: The TLC Story on VH1, because she is dead, and can't tell you the story I'm about to tell you about Chilli, who was as crazy as Left Eye without the astral projection monologues and desire to commune with the spirits of the Yucatan jungle. The story is this: Chilli once had a party an acquaintance catered out in some rent-a-McMansion out in the northern suburbs. She had to check on the party and pick a few things up, and when she walked in Chilli was allegedly butt naked and in the company of a young, well-built gentleman playing the part of the Spanish Auctioneer in their pairing. They were doing this in full view of the rest of the party. Chilli supposedly got it like a rock star, is what I'm saying, and that's something we should all appreciate that the movie totally left out of the story.

6. With four games left, there is a real possibility Florida does not make a bowl game. Georgia is a loss. Vandy could be a loss. South Carolina could be a loss, and Florida State could be a loss. Throw in Georgia Southern's FCS candy binge, and Florida has to pull one of those games to make a bowl game. There is not a convincing projected win in there save for Vandy, and they just beat Georgia. This is easily the worst Florida season since 1990, and could get a lot worse before it is over. Florida State is going to beat us by fifty. There is little to do about it.

7. The weird thing about the movie was not low production values, since this is a VH1 production about a group that managed to go broke at the height of their first wave of success. That's appropriate, really, since TLC's music was generally cheap-sounding, low-budget ATL R&B. It is not the production you'd even find on an En Vogue record. No one in the group could really sing their ass off, and no one was a brilliant lyricist, and no one made classic riffs or beats. They danced well in silk pajamas.

This was actually a very important element in a group's potential success in the 1990s.

8. Mizzou became the first team to score over 20 points on Florida since 2011. You can't ask a defense to play all three phases of the game. Okay, you can, but this is what happens: eventually they short out beneath the weight of the burden, and have this game where fatigue and pressure combine to burst otherwise immaculate plumbing.

9. The weird thing wasn't how bad the movie was, either, because it should have been bad. It is a tv movie about a musical group, and tv movies about musicians usually reek. HBO had every resource in the known universe for Behind the Candelabra, and it still felt hollow and boring because without music, what a musician or musicians does is, after a brief delight with the drugs and sex, the same thing you do. You go to work, you live a life. After the first disaster or two, you're either crashing in the same car over and over, or you're getting on to a happy, normal life.

10. And where the music biopic usually fails is in that transition from disaster after intriguing disaster to some kind of final note, and where I can take an offramp to get to the heart of the matter here, seven games into the Florida football season. This not only isn't fun anymore, but has hit the point where you can't even take pleasure in the depraved ineptitude of it all. At least the greatest musical biography ever, I Lived To Tell It All, understood the right trick to pull on the reader: make the recovery and comeback the shortest part of the book, and fill the rest with stories of increasing lunacy and excess. Right before the sobriety and triumph part happens, George Jones is kidnapped by Gulf Coast coke dealers and forced to OD on Peruvian blueflake. His body can't be killed with any amount of cocaine, and he escapes while a duck with George Jones' voice tells him what a horrible person he is. You want to really make this something to remember, Florida? DO SOMETHING THAT HORRIBLE LOSE BY FORTY TO VANDY. We don't want to just tap the ground on impact. We want to hit Hell's dining room fast and with the wheels up, preferably directly through the largest of Satan's exquisite crystal chandeliers. Leave no doubt, or get better. The first is easy, and the second is impossible with the injuries and basic offensive capability/strategy/syndrome afflicting this team.

11. Oh, the weird thing? That I never got to, about the TLC movie? It was shitty, poorly written, and slapdash, and they showed T-Boz and Chilli singing a new song that I forgot the instant it went off the air. And yet the end still filled me with sorrow for no particular reason other than it being something that was irrevocably gone, something cheap, and likable, and ultimately not good enough to last. I don't turn the radio up when I hear  "Red Light Special" because it's a great song, but because it reminds me of some stupid detour I took in 1995 in Atlanta, getting lost and driving through neighborhoods where people didn't have doors. I don't get nostalgic over the serious, memorable moments. I get nostalgic for stupid, wasteful detours. This means I may someday look at this Florida team fondly, so it's not all bad news and blood rain.

13. P.P.S. Go win the SEC Championship Game, Mizzou. No, seriously, go do it. Someone besides Alabama has to one of these days.