FULLCAST BACK? Oh yes, this time talking about all of the following and more:

We also have additional reader questions we didn't get to on air, so let's do that now.

A charismatic lemur with enchanted bangs.

@edsbs Rank all the quarterbacks that have started games for Steve Spurrier since 2000.

NOT COUNTING THE WASHINGTON YEARS, and in order from best to worst:

If we forgot one, well...they're probably best off that way.

@edsbs If you were to amalgamate the various gridiron games, which rules would you keep from each of NFL, college, and CFL, and why?

In short: we'd take receivers in motion toward the line of scrimmage and rouges from CFL, embrace the NFL's complete lack of concern for celebrations, and kill the current targeting rule and replace it with postgame suspensions to take the heat off the referees a bit.

@edsbs: Will Dan Hawkins ever get another head coaching job?

@edsbs What would a halftime speech from new Texas head coach Cormac McCarthy sound like?

Cormac opens his mouth. The dust of generations of the damned like fine rain falls from his mouth and it covers the air and the eyes and the faces of the players and their eyes and faces and mouths, like dry pools in the desert, collect its sorrow. Within their hearts they feel the centurion's bony hand, the futility of a departed violence and the grip of the dead old world's hatreds grabbing at the tattered warp and woof of their soul's fabric. It gets cold. Ice forms on their bodies. Cormac's mouth pours forth the sorrow of time and rust. A howling so loud it creates its own silence pours from his mouth and it pours onto the players in a long blizzard of the warrior's laments spread through time. The spores of gory ages infect them. They lose to Oregon. They lose to Oregon by fifty points and margins the ages will cover like corpses beneath the spring's plowing.

@edsbs Do the Braves win it all?

We don't know what that is. Here is a picture of a happy cow. 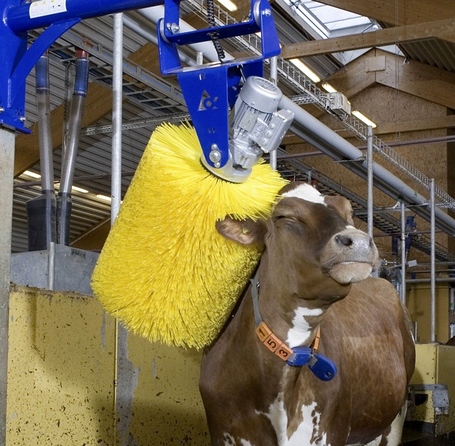 Never been fired! Though we asked to get fired, and it went terribly. (We didn't get fired.)

@edsbs where is the worst place, other than Birmingham (I'm a native I can say that), to have back to back bowl trips?

You'd think Mobile would be the obvious answer, but the dirty secret on Mobile is that it's shockingly fun, particularly if you like to get drunk and wake up on strange boats. Detroit has to be answer: cold, Detroit-y, and with entertainment (see: casinos) very few of those involved can take advantage of due to age or lack of funds. At least Memphis will be lukewarm to middling-cold that time of year.

@edsbs will Saturday's Muschamp/Bielema showdown be the most big dumb football game ever in the Swamp?

The biggest, and the dumbest, and we're going to drink a quart of house paint. Don't worry, as always it's just enamel. It'll just coat our insides for weather protection, not poison us, which is necessary because eating bowls full of carpentry nails is the only thing that makes watching Will Muschamp football not hurt us all over bodies. Haven't done that since the Zook years, but traditions are traditions.