BE ASHAMED, CONNECTICUT. BE VERY ASHAMED.

The season's midpoint means we finally have enough data to start making more meaningful comparisons of quarterback dreckage. So far, the Spike Factor has accounted for just over 28,000 quarterback plays, and 11,665 of those have failed to gain yardage. That puts the FBS-wide Spike Factor at 41.24%, but there are some players doing their part to make sure we drag that number as high as possible. We want to highlight five in particular, the only quarterbacks who have 200 or more plays with a Spike Factor above 50%. Again, that means that, more often than not, if these players are doing something other than handing the ball off, it does nothing positive for the offense:

Bravo, gentlemen. Bra-fucking-vo. On to this week's award winners!

Very quietly, it's been a crappy year for Tulsa. They're 2-4, have only beaten UTEP and Colorado State, and, thanks to Tulane, might not have the 4 wins left on their schedule they need to become bowl eligible. It's a sad fall for a team that's averaged nearly 10 victories a year the last three seasons, but there's good news:

Cody Green came through for the Golden Hurricane last week with a Spike Factor of 18.18%, low score of the week by a narrow margin over Cincinnati's Brendon Kay (18.6%). Green changed his life to better suit your mood, Tulsa fans.

Because he's so smooth.

Mediocre honors go to Stanford's Kevin Hogan, with a 44.12% Spike Factor in the first Cardinal loss of the year. It's almost as if calling two consecutive passes when faced with 3rd and 2 was a poor decision. Weird.

The sad thing about Brandon Allen's numbers in a home hammering to South Carolina is not his Spike Factor of 66.6. It's that it only came on 12 plays, because nearly three quarters of this game didn't even involve the Arkansas offense. If Steve Spurrier could play a football game with make it-take it rules, he absolutely would. Purdue continues to test the depths of terrible, with Danny Etling's 69.05% Spike Factor against Nebraska. And, because they refuse to win the award for which this whole thing was even invented, Kentucky is this week's silver medalist, thanks to Maxwell Smith only gaining ground on six of his 20 plays (70% Spike Factor).

The gold medal? It's someone who's been there before.

Bobby Eveld, winner of the Tetanus Spike in Week 2, threw 28 passes against UConn. He completed eight of them (though none for no gain or worse, so there's that). Bobby Eveld had 5 rushes on this stat sheet. Two were sacks, two were for a loss of yardage, and one gained eight yards.  72.73% of Bobby Eveld's 33 offensive attempts were failures. Bobby Eveld did a lot of bad and useless things. 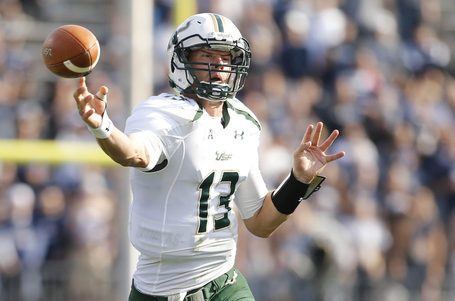 You know what else Bobby Eveld did? HE WON, SUCKERS. Congratulations, Bobby. Take this, your second Tetanus Spike, and drive it straight into the heart of Connecticut Football. It's not murder if it's already dead.