Share All sharing options for: SPIKE FACTOR, WEEKS 5 AND 6

The pessimist says there was no Spike Factor last week as planned. The optimist, however, recognizes that this week you get TWICE THE SPIKE for the same amount of money. (That's free, mostly because we can't figure out how to put up a paywall that accepts payment in the form of alcohol.) Warning: there is controversy ahead, because the Spike Factor is not here to make friends.

CARLOS SANTANA PLAYERS OF THE WEEK

Looking strictly at the numbers, the winners of this award should be Old Dominion QB Taylor Heinicke (15.38% Spike Factor in Week 5) and New Mexico's Cole Gautsche (12.5% in Week 6). Circumstances, however, dictate that we overrule the math here. In Heinicke's case, that performance came against Albany, an FCS team with a 1-5 record. Carlos Santana doesn't look kindly upon picking on the weak, Old Dominion, so Heinicke is disqualified. Gautsche, on the other hand, did (sort of) play an FBS team, leading a rout over New Mexico State. But he only threw 4 passes in the process, and Carlos Santana definitely doesn't advocate playing it that conservatively. Just look at his line of neckties.

Therefore, we have decided to move to the next eligible players on the list for each week in determining this award. Week 5's Carlos Santana award goes to Tyler Murphy, who gained yards on 21 of his 25 plays, a Spike Factor of 16%. Murphy's counterpart in Week 6 is Conor Shaw, returning from injury to finish with a Spike Factor of 17.24%. Double Santana GIF Time!

Oh, did we not mention who both Murphy and Shaw faced in those weeks? That's right. Kentucky. Eat it, you blue-faced dipshits. OR ELSE FORGET ABOUT IT.

The median Spike Factor for Week 5 belongs to Garrett Grayson of Colorado State, with a failure rate of 41.94%. This is probably the most we'll say about Colorado State for the rest of the year, so enjoy it. Week 6 was a three way tie, with a median of 40.82%. Medium work, J.W. Walsh, Jake Rudock, and Jordan Lynch.

In Week 5, we came very, very, very close to a repeat winner of the Tetanus Spike. Tommy Rees wheezed out a Spike Factor of 68% against Oklahoma, and if Notre Dame had managed to get the ball back for one more drive, I'm confident he could have locked it up for a second consecutive week.

Week 6's close-but-not-the-bottom performances mostly belonged to quarterbacks on bad teams facing some of their tougher opponents on the schedule: Akron's Kyle Pohl (68.42% against Ohio), Colorado's Connor Wood (65.79% against Oregon), and Idaho's Chad Chalich (63.04% against Fresno State) are all good examples. We should also, for homer reasons, note that Razorback QB Brandon Allen was not far off the medal stand last weekend, with 27 of his 43 plays against Florida gaining no ground. 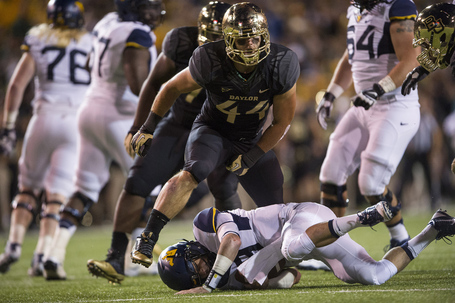 There's only room for one person each week at the top of Suck Mountain, however, and so we congratulate Chandler Whitmer (72.41% Spike Factor) and Clint Trickett (70% Spike Factor), who managed to be the worst in their field in Weeks 5 and 6, respectively. Trickett's performance is the more surprisingly, arguably, for two reasons. First, it came against Baylor's defense - and, granted, we may need to reassess our collective feelings about Baylor's defense. Second, Clint Trickett transferred from Florida State because he didn't beat Jameis Winston for the job. There is no job I don't think Jameis Winston wouldn't be better at than Clint Trickett, including "Rick Trickett's Son."