THE MISERY THE GLORY THE ENDLESS UNDERAGE POSSESSION CHARGES

Share All sharing options for: THE FULMER CUP ARRIVES. HOORAY?

The Fulmer Cup technically started the minute the BCS game mercifully ended, and will for the EIGHTH YEAR OH MY GOD tally up the crimes and misdemeanors of college football's finest. 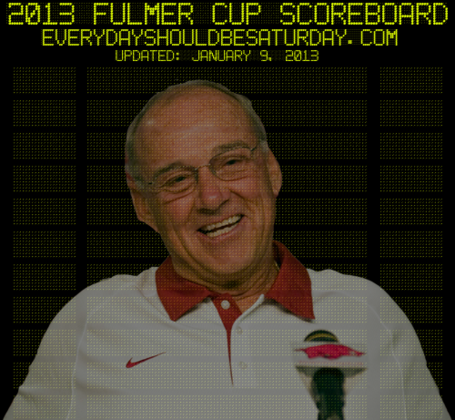 WHAT IS THE POINT?

The object, as always, will be to end the message board argument over what team is indeed the most unruly and disrespectful of the law, and use a flexible scale of points to determine this question. Points are awarded for misdemeanors, felonies, and in some instances certain traffic citations. The points are tallied up throughout the offseason, and then a leader is named just before the start of the season.

Starting on January 7th the second the game ended, and extending throughout the year until the day before the start of the season.

WHAT ARE THE RULES?

Eligible teams are FBS college football teams. Player must be enrolled at the time of the incident, and there must be some documentation of the arrest via news article or arrest record. Charges unless totally dismissed are left as they are initially charged in the first court appearance because the Fulmer Cup evaluates how often you show up in the news for living life without consulting the rule book, not about how talented your attorney may be. If you have a good attorney, that's great! Their odds of being an EDSBS reader are shockingly good, something that should just scare you about attorneys in general.

AND POINTS ARE AWARDED HOW?

BONUS POINTS? Awarded as needed, usually for style, and almost always only one at a time.

CRIMES NOT INCLUDED? Usually broken down by felony (three points) and misdemeanors (one point.) If something that doesn't quite fit there comes up, we'll do what we usually do: make it up as we go along.

HEY WHO DECIDES THIS, PAL?

We do. The Queen of Hearts does as she likes, and awards the points as she sees fit.

WHAT IF SOMEONE DID SOMETHING AND WASN'T CHARGED?

Then you have nothing, and we cannot award points.

ARE PLAYERS THE ONLY ONES ELIGIBLE?

Not necessarily, but it has to be close. Coaches with DUIs have been given points before, and in one outstanding case an athletic director received points for a spectacularly scandalous DUI. You might remember that, and GO DAWGS.

I HAVE SOMETHING TO REPORT!

Excellent. Spencer addressed at the sbnation dot com protocol will get this report to our processing center.

HURRR HOW BOUT YOU CALL IT THE [BLANK CUP]

Thank Boardmaster Brian in advance, since he's been doing this for years, and also follow along with the handy reference at SAS Wiki.

MAY THE SQUADS (POLICE) BE EVER IN YOUR FAVOR.