THE CASE FOR ALABAMA: THE SUN WILL WAIT

NICK SABAN'S CRYING BUT NOT FOR THE REASONS YOU THINK

Share All sharing options for: THE CASE FOR ALABAMA: THE SUN WILL WAIT

There is this magnificent moment at the end of the SEC title game when Alabama, odds and strategy and balance be damned, just said fuck this shit and started running the ball every down. Mind you, this is what they are good at, and this makes a fair amount of football sense. Steve Spurrier runs the same play over and over again because if it works, well, when planting time comes it doesn't make much sense to put something other than the money tree in your backyard.

I also know this is why Alabama did it, but I'd like to think it had something more to do with identity. It's more emotionally satisfying to me to imagine Alabama--clinical, counterpunching, robotic Alabama--doing it because when you strip them down to their skeleton, place them under the highest stresses imaginable, and dare them to feel one ounce of emotion more than yours--that they found the one thing left in their heart.

That thing was rage, pure, dark hatred, an anger borne from a thousand displaced and redirected miseries brought onto the football field. I like to think they were angry because they were from Alabama, angry like every Alabama team playing with boulder-sized chips on their shoulders. Those teams carried the transmogrified fury of every Yellowhammer Stater bleeding rage about how you don't get the state, or how other Alabamians were to blame for the state's failures, or how everything and anything will make you want to kill when it's 95 degrees, humid as a Bolivian jungle, and the wind won't move a hair on your head and football season is four stinking, worthless months away.

*The best part is that the ringleader for this is Barrett Jones, a violin-playing accounting major whose upbringing, demeanor, and quiet, business-like interviews could not contrast more with his blocking against Georgia. Barrett Jones was singlehandedly clearing the way through a stampeding Chinese air raid drill.

They played mean, passionate football, mostly because yes, they had to. It is so very hard to tell if the rest of the SEC has narrowed the gap with Alabama, or if this is simply just a different Alabama team than the antiseptic semi-pro teams of 2009 and 2011, a more flawed team that has on two occasions this year had to counterpunch and fight late in games. It is an indicator, by the way, of an insanely high degree of program continuity that you can say this about a program. They had to fight in like, three games! And even lost one!

That question of relative value--college football's great slippery metric--is still, here at the final game of the season very much up for debate. This may be Mark Richt's best team of his tenure in Athens. That team died against South Carolina, and yet somehow beat Florida in one of the most grotesque games not played with the Big Ten logos painted on the thirty yard lines. Florida beat the hide off that Gamecock team 44-11, grappled to a judge's decision against LSU, and beat Texas A&M on the road. They also lost to Louisville in the biggest upset in BCS history because, well, because to hell with easy answers, that's why. That Texas A&M team that Florida beat lost to LSU, but beat Alabama at home. The pattern for the past four years in the conference has morphed into something new; instead of one dominant team in each division, there are now two divisions with at least three very good teams, and then the hammered peasantry of the conference falling a full standard deviation below the upper classes.

That said: this is not a Courtney Upshaw team. This team gives up yardage--over 400 yards of it in three games, including the loss at home to Texas A&M and the narrow win in the SEC title game. There is a reason T.J. Yeldon and Eddie Lacy both had over one hundred yards rushing against Georgia--they needed it, and couldn't execute the usual Saban M.O. of piling up a four TD lead, sitting back on the defense, and watching the clock run as the opponent turned blue and succumbed to the inevitable.

It is not one of those orderly Nick Saban teams, and good for that. This team is far more enjoyable to watch. No one watches college athletics because people are efficient, or because someone's an effective tackler. Nick Saban got emotional talking about his father at a press conference. No really, he did, look, there's photos and stuff. 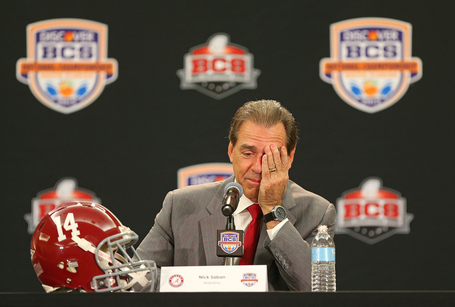 I'd like to think that even at his usual high cruising levels of self-applied pressure, this year's been worse than usual Nick Saban levels of misery for Nick Saban because of that--the youth on the roster, the close calls, the outright defeat to a team antithetical to everything Saban believes should be football, and the crushing power of expectation heaped on expectation on expectation.

That would be a misread. To assume a freak like Nick Saban reacts with tears to the same things you and I do would be a misread of the nearly unreadable person who by choice writes down "team dinner" in the midst of the SEC Championship Celebration. Saban remains the closest thing college football has had to Ahab, a mercurial obsessive bent and driven by a self-perpetuating rage for order, someone who unlike Ahab does not get the white whale and the resolution of a finale.

His least perfect championship game team does stand on the brink of solidifying a real live dynasty, a trend of three championships in four years obvious enough to convince the dullest skeptic. It is also his rawest team, the one he has the least control of in the moment, the one that when down has had to resort to its cudgel of an offensive line and satanic pairing of backs to save its hide. Worse still, the 2012 Alabama Crimson Tide had to rely on the least reliable thing of all in the clutch--a quarterback, the one thing a Nick Saban team could easily do without when the Controller has the dials on the knobs attuned just so.

It's a team that sits so close to the edge of chaos it has to kill Saban to coach them. That is, of course, why you should like them. When threatened with extinction, the 2012 Alabama Crimson Tide go from George St. Pierre to Roy Nelson, ditching the calm submission fighter's boring endgames for roundhouse punches and a raw frenzy capable of pushing their persnickety coach to the brink before victory, confetti, and the usual festivities erasing the late-game panic of a team that yes, can be beaten.

This is his least perfect of near-perfect teams, and that slightly less secure grip on the reins has to have one of god's own mutants as close to emotional haywire as he's capable of being.

Nick Saban would rather not involve any of those uncontrollable variables, and instead go seamlessly from the tunnel to the locker room to the limo and then back to the hotel, where film, recruiting calls, and maybe a few hours sleep await. Those can be measured, decided, and dictated. He would rather wear his hats to stay out of the South Florida sun, and proceed to the next whale, the next recruit, the next team, detail, or suspicious dot on the horizon. A normal person would soak it up, and take a second to sit on South Beach with their feet in the water looking out at the reddening dawn, and the fireball rising from its margins into the sky.

The sun will have to wait for another day of appreciation. It, too, has to wait its turn to revolve around the strange planet of Nick Saban.