CHIP KELLY HAS A VAN FOR THE STYLING AND COMFORT

NO, CHIP KELLY JUST LIKES THE WAY IT HANDLES

Share All sharing options for: CHIP KELLY HAS A VAN FOR THE STYLING AND COMFORT 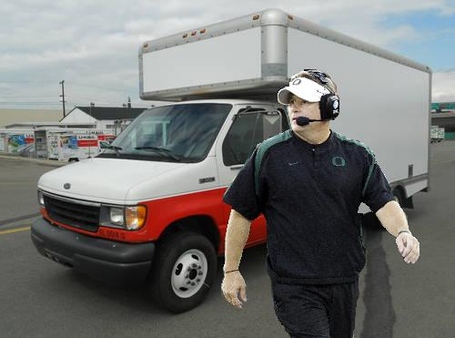 Speaking quickly on his way into the Ducks' final pregame meetings, Kelly praised the E-350's economy, performance, and styling.

"The truck's got some things. It's not just for moving. Certainly not just for moving across the country. For a new job. That kind of thing. Nope. Factory standard radio. Heckuva heater. Air conditioning. More giddyup than you think. Handling. It's surprising. The handling."

"It's the Colt Lyerla of vehicles," Kelly said laughing. "But Colt probably gets more than ten miles a gallon. This puppy. Gets thirsty."

Kelly has been linked to several NFL head coaching jobs of note, including the Cleveland Browns, Philadelphia Eagles, and Carolina Panthers. Kelly has refused to answer questions about leaving to pursue opportunities in the NFL, but many in the Oregon community believe he will leave after the team's appearance in the Fiesta Bowl.

Kelly gave no comment, but did praise the E-350's safety features as he entered the locker rooms in Tempe.