Share All sharing options for: BLATANT HOMERISM: THE SUGAR BOWL

1. THOSE FUCKING ORANGE PANTS. The last time Florida wore blue jerseys and orange pants, the Gators lost 30-23 at home to Florida State. That was 1999, the year when Pets.com had enough money to run Super Bowl commercials and boy bands flooded the airwaves, which used to be a thing when people couldn't listen to the music they wanted to. Someone just put on Tonic, and if the CD player in your car was broken, you just had to sack up and listen to silence or listen to "If You Could Only See" piped into your car for the 1,392nd time. Why anyone would want to wear the Tonic of pants combinations is beyond understanding. Do not ever wear these ever again, because they are cursed with awful late 1990s-ness, and are the equivalent of rolling down your eye-windows and letting someone shovel garbage into them. NEVER AGAIN.

2. THAT FUCKING FIRST PLAY. If you weren't convinced things were going totally sideways from the start, then Florida getting the ball first should have crashed every tripwire in your panic centers. All year long the pattern has been the same: that Florida wants nothing to do with the ball in the first half, and should just punt on first down and let its defense do its half of the game plan--namely, assaulting the other team until they would prefer to be doing something else. Then, in the second half, shock the opponent by "attempting things," and then "Falling on the opponent until fractures result." I

3. THAT FUCKING FIRST PLAY SERIOUSLY. A pass to Andre Debose, the most talented piece of unfulfilled hope, a pass way wide of its target, is clearly just Brent Pease desperately doing theatrical laps on the dusty, untouched $1,000 treadmill in front of company because look look look we totally got our money out of this! And predictably, the innocent and good-hearted attempt to involve Debose in the game plan resulted in disaster, because Andre Debose things just happen around Andre Debose like that. Him scoring a late kickoff return is still the most Andre Debose thing ever: spectacular, eye-popping, and too late to be of any use.

4. THE FUCKING TEDDY BRIDGEWATER. There's no one close in terms of him in quality on the schedule, and maybe not in the country. He throws a chest-fluttering ball of transcendent beauty. He is accurate, and panic-free. You can hit him with things as large as Smart Cars and he disregards all signals of pain. 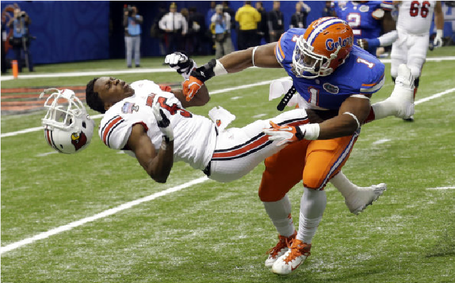 That's on the first series, the first of many series where Bridgewater just calmly accepted the completions he was given, and ignored the repeated applications of blunt force to his body. It should be noted he could do this since, for the first time all year, a quarterback had inexplicable amounts of time in the pocket to work, and work brilliantly against the Florida secondary. Louisville's offensive line stonewalled the Florida pass rush much of the night, so much so that the run game became a formality used to burn clock. Which they could do. Because they had a massive lead. Louisville. The Louisville Cardinals.

5. THE FUCKING ONSIDE KICK. There is no way to pack more incompetence into a single play than what Florida did to open the second half. There isn't; even allowing a TD return off an onside is simply losing a bet, and not losing the onside attempt and then accentuating the failure with TWO personal fouls. This then allowed Teddy Bridgewater to float one of his golden snitch god balls right over the top of Florida's coverage, and thus a humiliating TD, and thus a series we'd really like to delete from the archives forever.

6. THE FUCKING PENALTIES. This is still the dumbest Florida team we've ever seen. Talented as hell, and at root still the teen driver who hits the gas when reaching for the brake. Getting two personal fouls on the same play is a rare accomplishment, but here are, among achievers.

7. THE FUCKING HURRY-UP. A fat man sprinting, and Andy Reid-esque in execution. More of an Oregon Trail game than a hurry-up offense, and with a really high chance of dying of dysentery on the way.

8. THE FUCKING HORRIBLE AFTERTASTE. We don't even know. There's something to be written about where this team sits in terms of the whole year. That thing probably has optimism, and the admission that this team overachieved immensely, and that 11-2 from the perspective of August 2012 would have seemed insane. That would be the rational thing, but all we can see right now is confetti stuck to Charlie Strong's head and Florida getting a 15 yard penalty for standing in the white of the sideline. That's a procedural error, much like this whole game.