Did you think that Ron Prince's power has waned just because he's seasonally unemployed? Well you're wrong. Friend of EDSBS, Robert Wheel, shows just how nearly every head coach in college football is connected to each other, all because of Prince.

Share All sharing options for: RON PRINCE STILL HAS A GODDAMN POSSE

Did you know that Ron Prince is on the job market? Hard to imagine someone with an undefeated record against Texas still needs a job. Which is why I'm presenting the 2013 edition of Ron Prince Has A Posse (prior versions here and here). Consider this Ron Prince's CV, potential employers.

I was so excited when Ron Turner got the FIU job. And now I'm the first person to ever write that sentence.

Four former Saban assistants hold head coaching jobs, which is only three more than Gene Chizik. And Terry Bowden wins the award for the coach who fills up the most space in his oval. 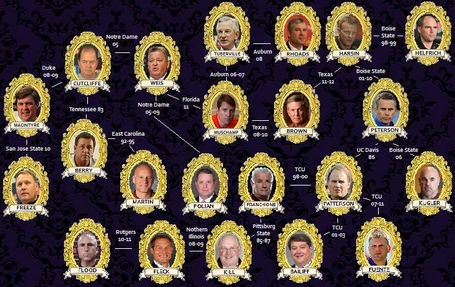 Hugh Freeze worked for Mike MacIntyre for a hot second but I'm still counting it. Also, Doug Martin is still an interim coach but the only other person to apply for the NMSU opening is Jerry Glanville and LOLOLOLOL.

Look at Lane Kiffin in that picture. It's like someone told him that his coaching tree consists entirely of his dad and Ed Orgeron.

Gary Danielson thinks the spread is a fad but Urban Meyer needs an overflow posting to show how many coaches are tied to him, so, yeah.

The Stoops Branch of Ron Prince's Family Tree would've been even further enhanced if Colorado had hired Mark Mangino as rumored. C'mon Buffs, you know you wanted the Mangino era in Boulder.

Coaches who worked at Grand Valley State in the '80s: Brian Kelly, Brady Hoke and Todd Monken. It's the new Cradle of Coaches because Ron Zook personally undid all of Miami of Ohio's contributions.

Of course, there are still five coaches who have not coached or played with another current college football head coach: Frank Beamer, Dabo Swinney, Dave Clawson, Pete Lembo and Joey Jones. But there's still time for VA Tech, Clemson, Bowling Green, Ball State or South Alabama to fire their current stiff and hire the most qualified head coach ever: Ron Motherfucking Prince.

(Shoutout to EDSBS commenter Jack Fact, whose idea I've ripped off two years in a row)