FLORIDA STATE FANS ALL HAVE A STORY

Share All sharing options for: THE FSU CROWD WAS AMAZING LAST NIGHT 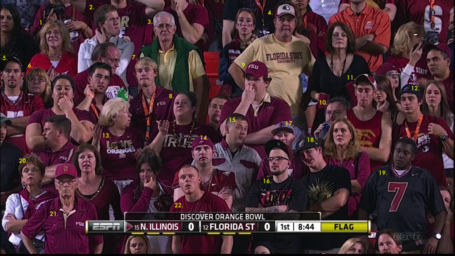 1. Phyllis has no idea what just happened, and may have just accidentally been granted entry when lost and holding a Miami Seaquarium Ticket. Did something good just happen? Bad? You can't go wrong with a fear grin, Phyllis. You can never, ever go wrong with fear grinning.

2. Prince Harry had no idea why everyone was calling him "Tosh Point Oh!" and fist-pounding him, but he went with it.

3. "THANKS OBAMA. THANKS A LOT FOR THIS DANGED SHITTY ORANGE BOWL."

4. Steve had once asked Jeff Bowden for his autograph. At night, he still wondered if that was the thing that gave him prostate cancer.

5. Surely that wasn't Aunt Karen's hand reaching from behind him, caressing his undercarriage with a forcefulness he'd never known. Surely she'd changed seats with some comely coed smitten with his neatly trimmed facial hair.

6. I'M ONLY YOUR AUNT BY MARRIAGE.

7. Neck extensions were pricey, and only offered in Belize by one surgeon with a two year waiting list. But you can't put a price on beauty, thought Chad, craning his neck high above the short-necked plebes surrounding him.

8. "Ricevuto come un cane nella chiesa!" she exclaimed. This was peculiar, as she was neither fluent in Italian nor medically awake.

9. His fingernails tasted like Golden Corral's honey bourbon chicken. This did not worry him half as much as it should have. He had not eaten at Golden Corral in weeks.

10. Steve Jobs slunk down. He knew going into public was risky, but when you get a chance to see a MAC team in a BCS bowl game, you have to risk undoing all the hard work of a good death-faking.

11. One person walked into this scene from a Breughel painting, and it is this man.

13. Slowly it dawned on her. This wasn't a trip to Vienna, and the Wheel of Fortune episode she won it on probably wasn't real. If only she'd followed her gut and doubted Katt Williams when he swore he was "guest hosting."

15. "I heard those new scanners at the airport inject you with a radioactive dye and then the military can activate the dye and you become an army robot slave. That's why I stole that bus."

17. "It's not just dogs," he said. "Turns out all kinds of animals love the taste of antifreeze. Just go crazy for it."

18. "No, see, that's the joke. They're turds that are homosexual. Well of course I realize feces don't have sexual organs, much less sexual preferences. You're totally ruining this."

20. Suzanne was displeased. "I bet that first down marker was made in Mexico," she shouted to no one in particular.

21. This is Frank, and he will be the last thing you see before you die, FSU fans. (Because he is a debt collector, and also Leon County's hardest working serial killer.)