Share All sharing options for: FULMER CUPDATE: FLORIDA KICKSTARTS THINGS, SO TO SPEAK 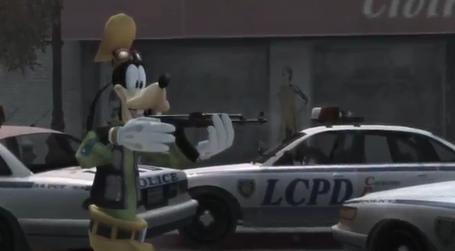 Jessamen Dunker, Florida offensive lineman, is 6'4" and 301 pounds. Now please imagine him attempting to steal a moped, as he is alleged to have done by the crack policemen at the University of Florida Police Department. Imagine him trying to be stealthy about it, creeping up on little three hundred pound cat feet, and then yelling like Niko Bellic as he notices the three badge alert going off in the corner of the screen, and looks for a paint spray shop to lose the cops and get back to achievement whoring.

For an alleged theft of moped, Jessamen Dunker gets the dreaded Grand Theft Auto charge, a rare four point felony count in Fulmer Cup scoring. An additional point on charges is given for driving on a suspended or revoked license. as for bonuses, the Florida Gator homer's bonus is a point, and seriously you are a 300 pound man accused of stealing a moped. You get a point for that alone, Jessamen.

Thus does the Fulmer Cup scoring for 2013 open with the home team, Florida, receiving seven points in the first documented score of the year. Having found seven points early, the Florida offense should shut down for the next two quarters at least before frantically coming to life in the fourth quarter.

THUS IS IT RULED. You know why a moped is like a fat girl, right? Because if you steal either one, the police will arrest you, and possibly imprison you for a while because that's totally against the law and violates the basic precepts our legal system is built upon in America. Our dear old dad! So full of factual jokes like this one, and "Why did the chicken cross the road? Existential dread, and the never-ceasing fear of death."