THE LUKEWARM JOY OF THE ADEQUATE HIRE

Share All sharing options for: THE LUKEWARM JOY OF THE ADEQUATE HIRE

Logan Thomas is returning to Virginia Tech for his senior season, and should. Like a glorious souffle of athletic potential, Thomas rose in 2011 to unexpected heights, and then collapsed in the stove in 2012 and became a scapegoat for Virginia Tech's worst season since the first Bush administration. The chefs running around the kitchen looking for the fire extinguisher were Virginia Tech's offensive staff, and yes, they did panic, grab for the baking soda, and threw a shovelful of coffee creamer into the oven with disastrous results.

Logan Thomas needs another year in college, and the person guiding him through this will be Scot Loeffler, late of Auburn University. He was, in some part, responsible for the Auburn's fart party on offense, a mismashed series of concepts, desperate swipes at a passing game, and a pro-style run game incapable of not tripping over the legs of its pulling guards. If this sounds like the Virginia Tech offense of 2012, it is not. The Virginia Tech offense was better in every imaginable and quantifiable way, and that is a very, very bad thing out of context.

Context always matters, however, and it's not like Loeffler was working alone in vacuum since everything at Auburn (save Corey Lemonier's efforts) was working in a vacuum, an infinite void of suck starting at the top with the vacancy that was the great shacket. Loeffler's record, like most 38 year old professionals, is a mixed one. For instance, he was good at what Temple wanted to do under Steve Addazio: run the daylights out of the ball, and give their quarterback limited, calculated shots with the ball downfield.

And in another example, this: 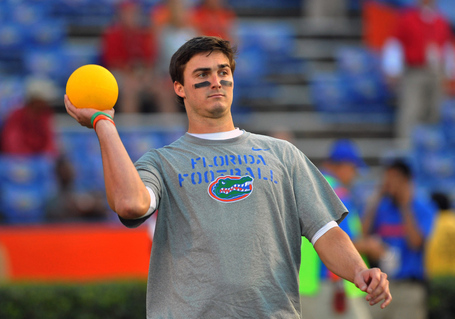 HE COULDN'T EVEN GRAB THE RIGHT BALL, LOEFFLER.

Anyway, prior to any of this he played some role in grooming a long list of NFL draftees at Michigan. You cannot take this away from him, nor can you say Charlie Weis didn't have something to do with Tom Brady, as in they were both in the room, and perhaps shared bites off the same stale office pastry. That is not a euphemism, because if it were we would be throwing up thinking about Charlie Weis gettin' it on with any pastry, much less Tom Brady's leftover confections.

What we're trying to tell you, Virginia Tech: Loeffler is the hardest kind of hire to evaluate, and that is an adequate to decent hire. He's in the middle of his career, and runs an offensive system that will have no one confusing the Hokies for Oregon. He'll run the ball, and work Logan Thomas into the run game with the zone read, something he did quite effectively with lesser ingredients at Temple.

It is not a bad hire, and it is certainly not a shoe-knocking hammer throw of a signing, either. It's adequate, and will do nicely enough for what Virginia Tech is under Frank Beamer: a defensive team that scores points through field position and, at one point in the past, through special teams. The Hokies bought a four door sedan because dammit, what would they do with a sports car? Wrap it around a telephone pole like Tommy Tuberville did when he tried to go up-tempo and spread at Auburn? Or whatever the hell the identity crisis is that Mack Brown's having in Austin?

Nah, Frank's fine with the Celica.* Or Scot Loeffler. Whatever the hell you want to call it. It gets them where they want to go, and gives Logan Thomas a reliable way of getting from point A to point B on the football field. It's easy to say a hire is bad or good. It is hardest to explain the average to okay hire, i.e. someone like Scot Loeffler. You'll probably be average to competent on offense this year, and given what happened to Logan Thomas last year, that would constitute improvement.

You'll probably be okay. And that, when you've got so many other things going for you, is decent enough. Here's a modest thumbs up for that.

P.S. He is not Brian Stinespring. Just say this to yourself when things go badly.